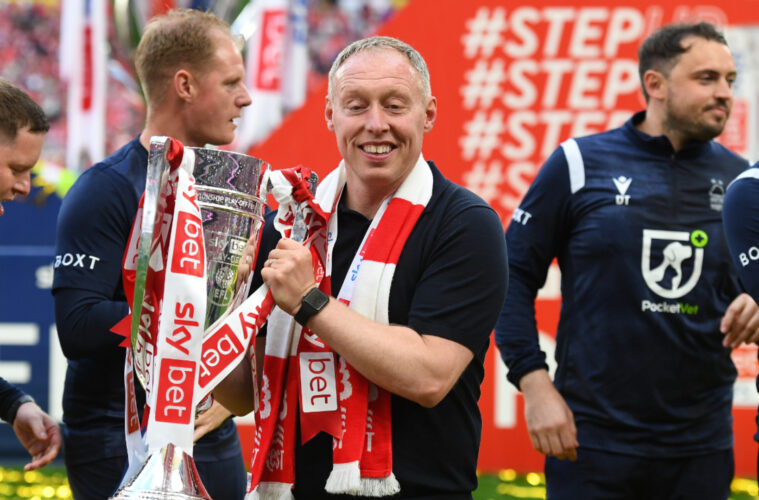 Nottingham Forest will return to English football’s top table for the first time in a generation next season after defeating Huddersfield 1-0 in last Sunday’s Championship playoff at Wembley, the club’s first trip to the national stadium in three decades.

Any dust that may have gathered inside the trophy cabinet in the years since their halcyon days doesn’t make their history any less impressive; as two time winners of the European Cup under Brian Clough in 1978/79 and 1979/80, they hold a rare status of having won more continental titles than domestic.

Now the 40,000 fans who travelled to Wembley, and plenty more back home in the Easy Midlands, have the opportunity to support their club at a level that reflects their history, which also features the First Division title of 1977/78 and FA Cups of 1897/98 and 1958/59.

‘Nottingham will be buzzing all summer after that. It was such an incredible achievement considering where they were when [manager] Steve Cooper took over; they were nowhere, fighting relegation’, The Athletic’s Rob Tanner told Box2Box.

‘I saw them live when they hammered Leicester in the FA Cup [in February], and I was so impressed with the aggression and organisation of the team. They also beat Arsenal in the Cup, they are a side that knows they can beat Premier League teams, so they’ll go up without fear.’

As with almost all promoted teams, Tanner believes Cooper will need significant financial backing if Forest are to compete and remain in the top flight in what will be their first Premier League campaign since 1998/99. Cooper had previously been best known for leading England’s U17’s to World Cup success in 2017, before a spell at Swansea City in the interim.

‘They’ll need to spend a lot of money to be in best shape. It’s a squad that’s been put together from a lot of loan signings, bits and bobs here and there which Cooper has brought together superbly, but they still need a lot of work.

‘I think most Leicester fans will welcome it as well because they’ve now got a genuine local derby. Aston Villa have been their nearest rivals, West Midlands versus East Midlands, but now there are neighbours from on the doorstep. Forest are right there, challenging for the title of Midlands champions, which Leicester have held for a number of seasons now!’

Forest’s success hasn’t come without controversy, with the Premier League opening their own investigation into owner Evangelos Marinakis and match fixing claims made against him in 2016. Although cleared by the notoriously porous EFL fit and proper ownership test in 2017, the Daily Mail has reported the league will drill deeper into his conduct and fitness to own the club.

Marinakis has since been acquitted in Greece’s Court of Appeal, but his reputation remains somewhat besmirched. Either way, Tanner was unenthused that the League’s platitudes would develop into anything concrete.

‘The fit and proper persons tests in the past have basically been, ‘have they got the funds? Yes? Then that’s it, they are fit and proper.’ Nothing else has ever been checked about their backgrounds.

‘Birmingham City are a classic example: Carson Yeung, a hairdresser from Hong Kong who was able to buy the club for £70million, that went through at the second attempt… he ends up getting sent to prison for money laundering. Nobody did a fit and proper tests on him, other than to ask if he had the funds. And we’ve seen the mess the club’s been in ever since.’