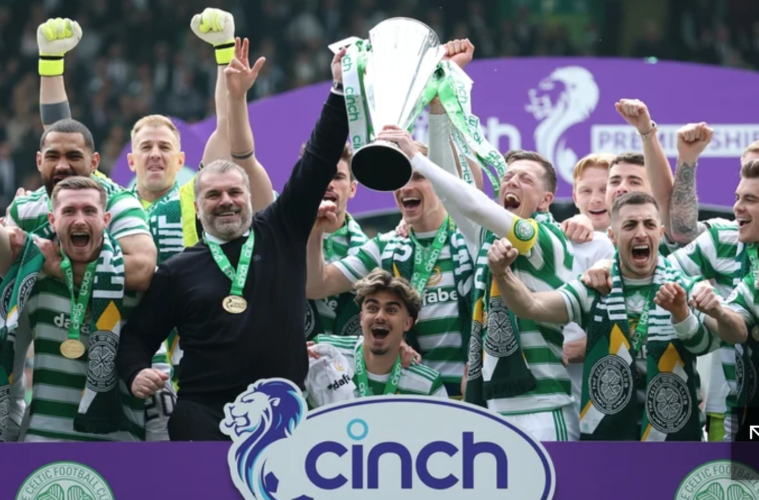 Celtic have this week lifted their tenth Scottish Premiership title from the last eleven seasons, their 52nd in total. When success comes at such dizzying frequency, those on the outside could be forgiven the assumption that it felt like a formality. But the scenes in Glasgow this week said otherwise.

The Athletic’s Kieran Devlin believes this title, Celtic’s first under Ange Postecoglou, really does have a touch of gold dust that sets it apart. The pain of watching Rangers ruin plans of ten in a row last season; hesitance towards their unknown manager turning into a full blown love affair; their suite of new fan favourites giving it all across five old firm fixtures; all played their part in the outpouring of emotion seen this week.

‘Because last season was so poor, it made this quite special. But the other thing is Ange and the players. The football they’re playing, the character that Ange is, the hunger, and desire and the entertainment value the players are giving. This is a really well liked team, the fans feel they have this connection with them’, Devlin told Box2Box.

‘I’ve chatted to loads of fans and people around the club and they really, desperately wanted to win this title because of that connection. They feel it as validation of what Ange is building, and of all these new players who have gelled together so quickly.’

‘People have compared it to the great Brendan Rogers teams, the great Martin O’Neill teams. Maybe [this group] haven’t won as much silverware or made an impact in Europe as yet, but in terms of fan connection with the manager and players, I think this is something special.’

Postecoglou has packed the rebuild and crowning glory into just one season of 60 games, and will break further new ground next season in becoming the first Australian to manage in the (Men’s) UEFA Champions League.

Serendipitously, changes to UEFA’s ranking coefficient means Celtic are straight in, avoiding qualifiers for the main draw for the first time since 2008/09. It presents a golden opportunity to turn their recent European performance around, having not progressed from the Champions League’s group stage since 2012/13.

‘Ange is a very ambitious guy, I imagine he’ll be savouring the prospect of Champions League football next season. Not having to go through very tricky qualifiers at the start of July makes things so much easier, because budget-wise the club can plan without having to worry about whether they’re planning for a Europa League budget, or a Champions League budget.

‘It’s also seven weeks between their final game and their first preseason game, a long time to rest and recuperate. Some of the Japanese players in Daizen Maeda, Reo Hatate and Kyogo Furuhashi… have been playing eighteen months of relentless football because they played a full season in Japan before coming over. So with a proper break, they’ll be raring to go.’

In Champions League competition you can simply never have enough quality to call upon, and further signings will be on the agenda following the departures of long-term servants Tom Rogic and Nir Bitton.

‘It’s not going to be as busy a summer as last, but I know there are three priority positions: a right-winger, a left-back and ball playing centre-half, and I imagine there might be two-three more they’ll try and recruit on top of that.’

‘What I’m curious to see is all how that extra time on the training ground they have now can continue to the challenge of Champions League football next year, because as we all know Ange isn’t going to compromise his style of play. Whether that’s against Ross County or Manchester City, it’s going to be really interesting to see how Celtic handle that step up.’