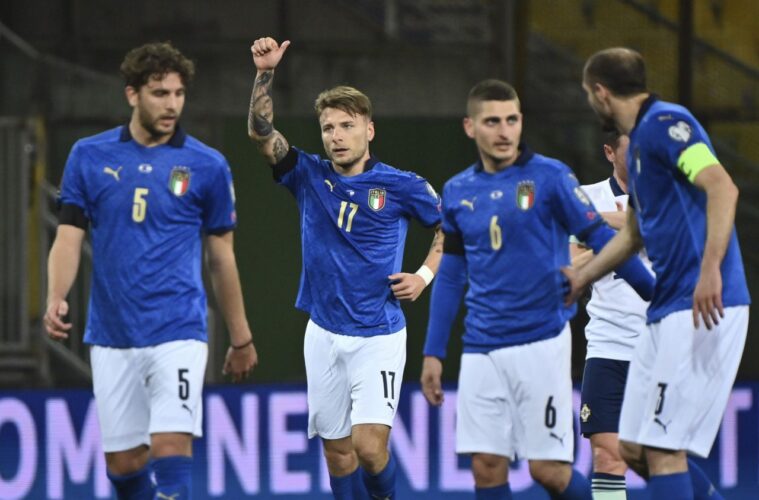 Italian football’s date with destiny is approaching. Missing the World Cup for the first time in 2018 was nothing short of a national sporting tragedy, tearing down any illusion that qualification was a given. After great introspection it steeled their resolve, and it seemed nothing would deny them a place at Qatar.

Yet here they are again, sitting at the crossroads of triumph and ignominy, remarkably with European Championship winner’s medals around their necks. Roberto Mancini’s men haven’t done much wrong, setting a new world record of 37-matches unbeaten en route to that triumph, but failure to seal top spot in their qualifying group sees them back in the mixer.

‘It’s a very, very tough pill for any Italian to swallow. I can tell you from here on the ground, from a national team perspective it’s all anyone has been talking about since the failure to directly qualify for the World Cup. It is a sickening feeling amongst Azzurri fans’, Optus Sport’s Adriano Del Monte told Box2Box.

‘After that failure to qualify against Sweden four-and-a-bit years ago you would have hoped they would have learned from that, but not the case. Despite winning the Euros, despite that 37-game unbeaten run of which since they’ve only had one loss, it’s really tough to comprehend how Italy find themselves in this position.’

Covid-19 has stripped football’s schedule of time for second legs, so the play-offs are one and done, do-or-die: Italy face North Macedonia at home on March 24, and if they win they’ll travel to face the winner of Portugal and Turkey five days later.

It’s hard not to forecast a mouth-watering clash between the Azzurri and Portugal, winners of the last two Euros, for a place at the World Cup, but Del Monte holds concerns for North Macedonia, too. Despite the retirement of generational leader Goran Pandev they no longer represent an easy result, hardened by their own experience at last June’s Euros.

‘North Macedonia is first up, and I have as many concerns for that match as I do for the [potential] second because they’ll certainly play a brand of football that will be defensive. They’ll sit eleven behind the ball and force Italy to try and break through.

‘Without Federico Chiesa (absent following a knee reconstruction in January) Italy really lacks that player with the attacking sense and pace to get in behind. There’s no Leonardo Spinazzola either, another player who can do that, so there’s two key figures missing from a personnel perspective.’

‘I still think Italy are one of the best teams in world football, that’s why they won the Euros. I don’t think they are the most talented team, a lot of it was down to Roberto Mancini and his squad, the love that they had for one another. It really does need to be a team at its tightest to do what looks very tough on paper.’