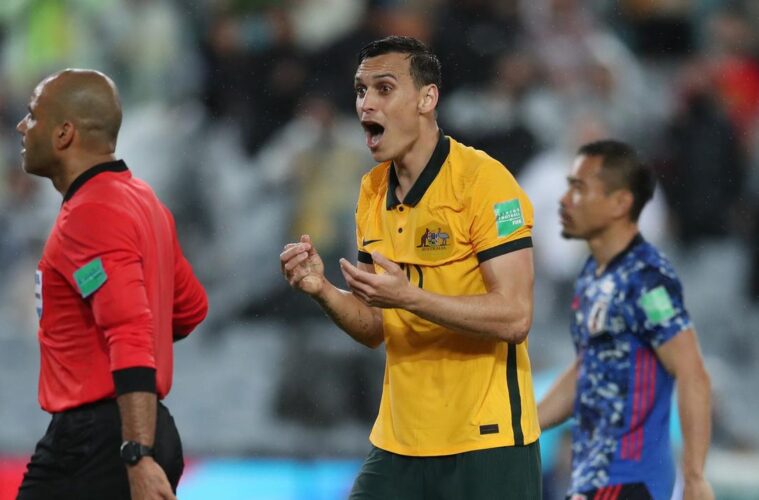 In the build up to the Socceroos must-win fixture against Japan at Sydney’s Olympic Park last Thursday, plenty was made of the rich history the side has carved at the venue. The legendary feats of John Aloisi, Tim Cahill and Josh Kennedy are held dear by any Socceroos fan worth their salt, and fingers were crossed that the rich pipeline of magic could again be tapped.

What followed could not have been further from another entrant into the venue’s catalogue of famous nights. Missing ten senior players through injury or Covid-19, the side slumped to their first ‘live’ World Cup qualifier loss at home in forty years, on a sodden night with plenty of empty seats in the stands.

The 2-0 loss to Japan means the Socceroos have missed out on automatic qualification for Qatar and will finish third in their qualification group, and attention now turns to the inter-confederation playoffs in June. Whether manager Graham Arnold is retained for that assignment is in the lap of his employers.

‘You can’t knock the Socceroos’ effort, they really tried their hearts out and you could see the desperation in their play. Unfortunately we ran into a red-hot Japan side while we were understaffed… and that didn’t help our cause, but we were outplayed and certainly didn’t deserve anything from the game’, said Ray Gatt, former Chief Football Writer for The Australian.

‘Arnie’s got a lot to answer for; he’ll put up his hand and say mistakes have been made, but to get rid of him now doesn’t make any sense. We’ve got one game against Saudi Arabia, then a playoff against Iraq or the UAE, and there’s no guarantee we’ll win that.

‘So the new coach will have only had two games in charge, and from what I understand Football Australia aren’t flushed with finances either, so they’d have to pay Arnie and a new coach. I think we should let it run its course, keep Arnie in charge for the Saudi game and playoffs and go from there.’

The absences of Jackson Irvine, Aaron Mooy, Tom Rogic and Mathew Leckie, variously through injury and Covid-19, left the outfit feeling hollow. While nobody’s fault, these are the leaders of this campaign, and qualification or otherwise should have shaped their legacy in the green and gold.

It left Arnold grasping at the selection table, and Australia’s football public again engaged in big-picture debate sparked by the selection of a few: what does it mean to heap the creative burden of Marco Tilio, send an SOS to Bruno Fornaroli, and descend into deep anxiety over whether Cristian Volpato will deem us worthy?

‘We’re not producing or harnessing young talent like we used to. The golden generation days are long gone and it’s a long way back to get to where we were. In Asian football the likes of Japan have overtaken us and are now lightyears ahead, and countries like Thailand, Indonesia and Vietnam are all progressing while we’re at a standstill.

‘Our junior development systems are all over the place. A lot of this started when we got rid of the football program at the AIS… that program produced the likes of Viduka, Moore, Aloisi, Bresciano, Emerton, Niell, Grella, Skoko. The sort of talent we would die for now!

‘We’re getting little splinters of talent like Daniel Arzani and Tilio who look the goods, but it’s sad we’re trying to grab onto them and build them up to say ‘this will be part of the next generation’, but it’s not happening.’

Arnold is not to blame for the game’s stalled development pathways, but he will be accountable for the Socceroos missing their first World Cup in twenty years if it’s to be the case. Whether before the end of this qualification period or after, the Socceroos will be in the market for a manager sooner rather than later.

‘I’d like to have Marcelo Bielsa, but I don’t think we have the money to entice him. If we manage to make the World Cup, then maybe he’d be a chance. I think Tony Popovic or Kevin Muscat would do a good job, I’d have no complaints if they were handed the reins.’