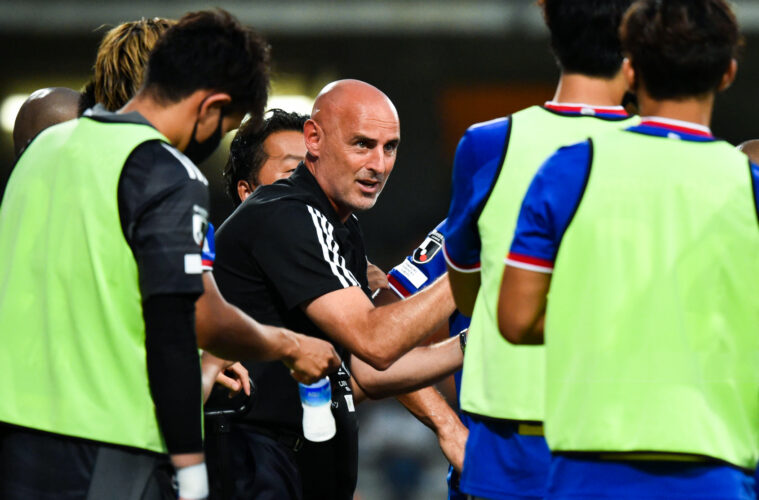 Kevin Muscat’s Yokohama F. Marinos could sit atop the J1 League by Saturday night, should they negotiate a tricky trip to fifth-placed Kashima and leaders Kawasaki drop points at Consadole Sapporo.

Muscat has slipped seamlessly into the Marinos top job, overseeing five wins and a draw from his first six league matches with goals aplenty, reeling in the gap on stuttering Kawasaki to one point heading into Saturday’s fixtures.

Critics will question how much Muscat has actually done since replacing Ange Postecoglou, with Muscat himself recently telling Optus Sport ‘the club has got Ange’s fingerprints all over it.’

But there is undeniably a managerial art in recognising when one is starting their innings on a good wicket, and Japanese football journalist Sean Carroll told Box2Box Muscat has impressed regardless of how strong the side was before his arrival.

“I knew about the way Muscat had played when he was a player, obviously he was known as being quite an ‘enthusiastic’ player. I wasn’t really sure how that would transition into how he’s coached his teams.”

“But thus far, he’s pretty much stuck to the instructions of how the team were playing. They’re very attacking, keeping the ball, looking to move it around quickly and get in behind, using the pace and skill they’ve got in their wide array of forward players.”

While assistant coaches at the club, which include Australians John Hutchinson and Shaun Ontong, have no doubt played a role in the transition, it’s undeniable the group has been spurred by Muscat in some capacity.

The 60 goals scored by Marinos in their 26 games is the most in the league, a tally that’s grown by 21 in six matches under Muscat. At the other end of the spectrum another Australian continues to earn plaudits in the League’s best defence.

Nagoya Grampus goalkeeper Mitch Langerak has drawn level with his own J1 League record of 17 clean sheets set last season, and could break it when they host Shimizu S-Pulse on Sunday evening.

Nagoya’s 20 goals conceded from their 26 games is bettered only by Kawasaki, but that Langerak (and the defence as a whole) stand to break such a record with 11 matches to play is remarkable.

“He’s done really well and I think a lot of it is rooted in the fact that he’s a very serious guy about what he’s doing. You sometimes get foreign players come here and they are winding down their careers, they think the league is not at that high of a level.

“I’ve spoke to Mitch a fair few times and it really shone through that he’s taking it very seriously, he’s here for the long haul, and to be successful.”