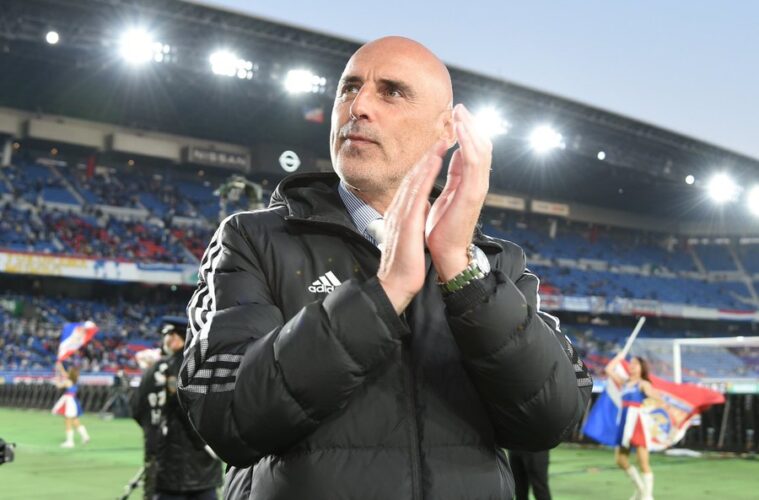 Kevin Muscat’s Yokohama F. Marinos can take another step towards what some considered an unlikely J1 League title at the season’s outset today, when they travel to fifth-placed Cerezo Osaka (8:00pm AEST).

The Marinos head into the match in red hot form off the back of twelve goals in their last three matches, as part of a broader six-game unbeaten run that’s opened up a five-point lead atop the table.

If anything, they’d been predicted to slide further from the heights that saw them lift the domestic title under Ange Postcoglou in 2019, following the recent departures of Daizen Maeda and Thiago Martins. But Muscat has defied the odds in both turning over the list, and rekindling what The Asian Game’s Paul Williams described as the ‘irresistible force’ that defined the Postecoglou era.

‘I certainly think what Muscat’s achieved has been pretty remarkable, so far. He came in halfway through last season and the foundations had been left behind from what Ange Postecoglou had built, but there were some early signs that things were just starting to stagnate a little bit’, Williams told Box2Box.

‘There can be a temptation to downplay what Muscat is achieving because it’s easy to see this as Ange’s team that he’s simply carrying on…but 23 players left Yokohama at the end of last season, thirteen players have come in, it was a massive squad overhaul.

Following the end of his fifteen year association with Melbourne Victory in May 2019, Muscat has spent the past three years outside the eyeline of the bulk of Australia’s football public, firstly during a Covid-hit spell with Belgian side Sint-Truiden before the last twelve months in Japan.

Williams feels his touchline demeanor has matured in that time, in contrast to the notorious hardman reputation he developed as a player that he’ll likely never shake in some parts of the football world, regardless of where management takes him.

‘When I watch him on the sidelines now he seems to be a much calmer figure, there’s not as much barking or yelling instructions to players. He just stands and watches and takes it all in, he seems to have really developed that side of his personality.

‘It perhaps allows him to see the game better, to make better in-game decisions. That was perhaps one criticism Victory fans had, his in game management and substitutions in the early years, but he seems to have evolved that part of his game as well.

‘He’s probably refined in his mind the type of football he wants his team to play, and how he wants to go about doing that. Going over to Japan and having to work in a dressing room where they don’t speak your language and the culture is very different… the development of that side of his coaching where he’s having to change how he gets his message across will certainly hold him in good stead going forward.’

Beyond this evening’s match with Cerezo, the Marinos face a huge month in the league that will likely define how hard they can attack the Asian Champions League knockout stages. Meetings with Kashima (July 30) and third-placed Kawasaki (August 7) will dictate how Muscat utilises his playing resources when their ACL campaign resumes with a two-legged Round of 16 meeting with Vissel Kobe from August 16.

‘If they win those [league] games and give themselves some breathing room when they go into the Champions League, that’ll hold them in good stead. They can go all the way [in Asia], there’s no reason why they can’t. There would be no team they would fear, I certainly think they’d be one of the favourites for the final when it gets played next year.’