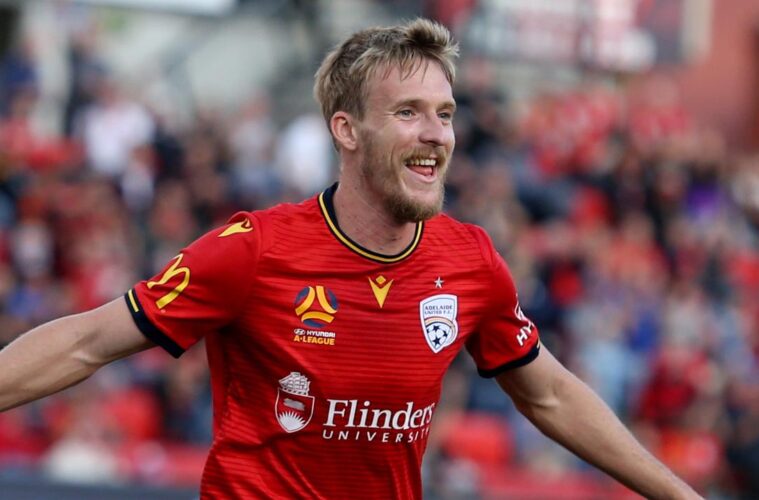 Adelaide United CEO Nathan Kosmina is confident the Reds can still contend under Carl Veart this season despite Ben Halloran departing for FC Seoul and outspoken skipper Stefan Mauk pushing for a move to Japan.

Often upheld as leaders among Australian clubs for transfer market nous, Adelaide have swiftly regained Lachy Brook on loan from Brentford for the remainder of the season and have also added Japanese striker Hiroshi Ibusuki to cover for the injured Kusini Yengi.

Kosmina told Box2Box the club were at peace with the loss of Halloran, who after playing the most consistent football of his career is primed for a return to Asia after a short stint with V-Varen Nagasaki in 2018.

‘Ben has been with us for two and half years now, he’s one of our senior players, one of our most consistent performers. He came to us with European and Socceroos credentials so we’ve had him into the peak of his career, from 27 years of age to nearly 30 now.

‘That’s a loss but it’s somewhat inevitable that when you have players who play well, you’re going to get interest from overseas… the fact that so many players have moved from us, we see as a positive.’

Kosmina’s predecessor Bruce Djite was widely lauded for his openness regarding the club’s transfer strategy; not only to provide opportunities for South Australian talent, but also to embrace the benefits of acting as a ‘selling club’ when the time is right.

They signed Riley McGree in January 2019 with the intention of cultivating his stock price and cashing in down the track. That came in October 2020 when he was sold to MLS side Charlotte FC and McGree has now moved again, commanding a transfer fee from Middlesbrough.

Kosmina declined to comment on whether Adelaide benefitted from the sale, but did nominate McGree as an example of their philosophy in action.

‘We’re not in the business of letting good players go, and there are financial [benefits] that come along with transfer arrangements…You look at McGree, Lachy Brook, Paul Izzo, Nicola Mileusnic, there’s been movement of players from our club which we see as good for them and their careers.

‘Ultimately…we need to accept that the A-League is not the top of the pyramid in terms of football. Inherently players are going to seek opportunities at a level higher than what they are currently playing, the prestige that comes with that, the salaries, and everything else.’

Whether that approach extends to Mauk remains to be seen. With six months remaining on his contract there would be benefit in letting him go now, but Halloran’s departure means they’d be reticent to lose his contribution, too.

‘Stefan is still speculation, there are discussions being had but nothing final as yet. To lose players mid-season is never ideal in terms of squad stability, it’s something that happens in leagues all over the world though so we’re well prepared to deal with it.

‘Movement of players in the football industry is somewhat common, it’s how you prepare and deal with it, I suppose, that tests clubs, and we’re confident we’re well positioned for the back end of the season.’