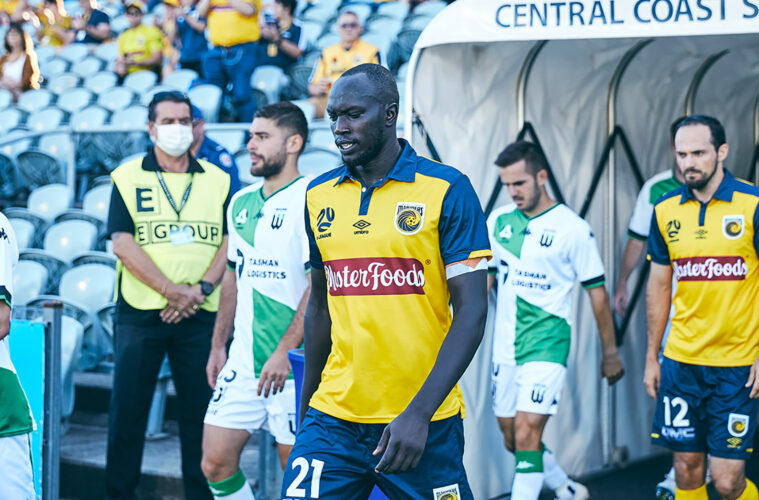 The Central Coast Mariners have defied all expectations to remain in the mix as the A-League season reaches the pointy end, and will need to do so again tonight when facing Melbourne City at Aami Park.

After a blistering start the Mariners have been treading water in the top two in recent weeks, and will need three points to reclaim that position from Sydney FC.

The man who will have the unenviable task of marking Jamie Maclaren tonight, Mariners centre-back Ruon Tongyik, is confident their game style will hold up against the competition’s best side.

“I think with the way we play, we shouldn’t let them control the game. We go there with the mentality based around the way that we play, and off a win against Newcastle that’s really built up our confidence”, Tongyik told Box2Box.

“Everyone in the league knows they’re a very, very good team, but we’ve proven that we can beat them. I think were capable of doing it.”

Tongyik and his defensive colleagues have in many ways represented the club’s season at large; given little hope of competing from the outset, they’ve blossomed under Alen Stajcic and maximised their ability beyond what anyone saw possible.

Ahead of the season, the team sheet didn’t exactly inspire; Tongyik had been at four other clubs prior to turning 23, Jack Clisby hadn’t settled at his prior three, Stefan Nigro was a Melbourne Victory discard, and Kye Rowles had spent his early seasons out of his depth with little help.

They’ve combined to concede just 27 goals so far, the fourth least of any side, and Tongyik explained they are taking pride in each playing career-best football alongside each other.

“From the start of the season we’ve kept it going where we just defend as a unit. The main thing that sticks out from us is the way that we cover each other on the pitch.”

“The best thing about it is we can learn from each other… we’ve got a very good squad and I think, defensively, continuing to play week in week out is helping us improve.”

Tongyik was earlier in the season at the centre of a heart-warming yarn, with it revealed his friendship with elderly neighbour and passionate football fan Remo had helped him make the most of his opportunity with the Mariners.

“My family’s back in Adelaide I’ve met such a gentleman. Remo has helped me a lot outside of football, getting my head away from football and listening to understand someone else’s perspective.”

“When he comes over we analyse games, I think my love for the game has gotten stronger from enjoying the game with him.”