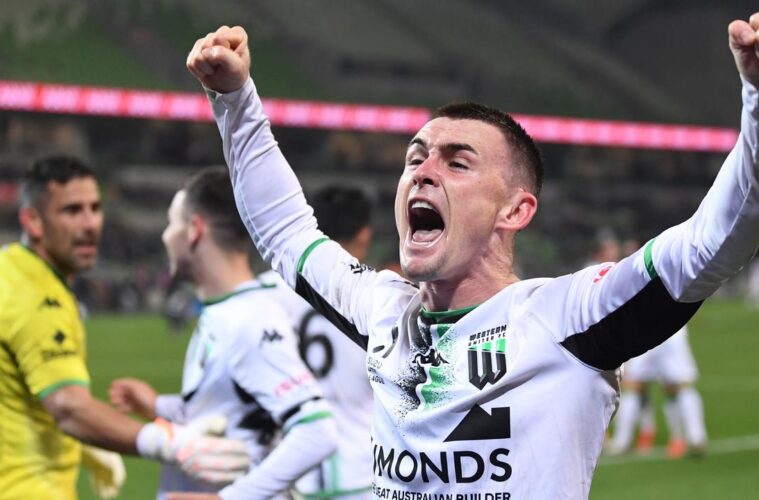 As Dylan Wenzel-Halls slid the sealer into Melbourne Victory’s net at the death of last weekend’s A-League semi-final second leg he tore off towards the Western Service Crew, well aware of the impact that goal could have in his club’s ongoing battle for growth and legitimacy.

Tonight’s A-League Grand Final presents Western United with their biggest opportunity yet to establish themselves as more than a franchise, as a club that demands respect on the domestic scene. They’ll head in as underdogs against Melbourne City, the dominant side of the past eighteen months; just how the United dressing room likes it.

‘Throughout the season no one has really given us a chance. Prior to the season, pundits definitely didn’t have us in the top three, that’s for sure, so to prove people wrong has been motivating us’, Wenzel-Halls told Box2Box.

‘We’ve got a lot of young boys striving to make a name for themselves in the professional game and a lot of experienced players too, so the dynamic of the team is really good. We’ve been on the road a lot this year in Tasmania, Ballarat, Geelong… we haven’t played all of our home games at the one ground so of course that’s difficult, but the team gets on so well.’

Wenzel Hall’s first season at Western United hasn’t necessarily gone to script. Having been a fixture on the team sheet in his final season at Brisbane Roar he’s at times found himself behind Aleksandar Prijovic, considered an either or proposition by John Aloisi in the early stages of the season.

But persistence has paid off, and injury to Alessandro Diamanti opened up a position behind Prijovic; handed a start in all three finals so far, Wenzel-Halls was still standing, ninety-nine minutes into the semi-final second leg, to land the decisive blow.

‘I put it into a relatively open net, but it was one of my favourite goals just because it meant so much to the club. I watched the video back and seeing John [Aloisi] and Foxy [Hayden Foxe] and all the boys on the bench and the team come together, it meant so much to everyone.’

‘I hadn’t really had a lot of time to play together [with Prijovic] but I’ve always thrived and enjoyed playing with a second striker up top. We compliment each other…I’m the willing runner with the pace to make forward runs while he holds the ball up and brings in others to the game. And he’s a fantastic striker, unbelievable at finishing around the box.’

Perhaps it’s no surprise that as the season wore on Aloisi, famously a striker himself, managed to balance the pair and extract their best. Tonight could prove Aloisi’s great redemption: considered by many as used goods after two ultimately fruitless stints with Melbourne Heart and Brisbane Roar, he waited almost three years for a third opportunity in management.

With minimal fuss he guided Western to seven 1-0 wins in the front half of the season before adding another layer towards the end, putting six past the Glory in Round 24 and four past Victory last weekend.

‘The biggest thing I’ve learnt under John is how structured his teams are. At prior teams I was at, I could float around and do what I wanted… whereas John’s got an outline of how he wants his strikers to play and that’s leading the line as the focal point in attack, but also to defend.

‘I’ve been really impressed with the club from head to toe. The backroom staff, owners, CEO, it’s a special club to be part of, and we’re all looking forward to doing our best to make history on Saturday.’