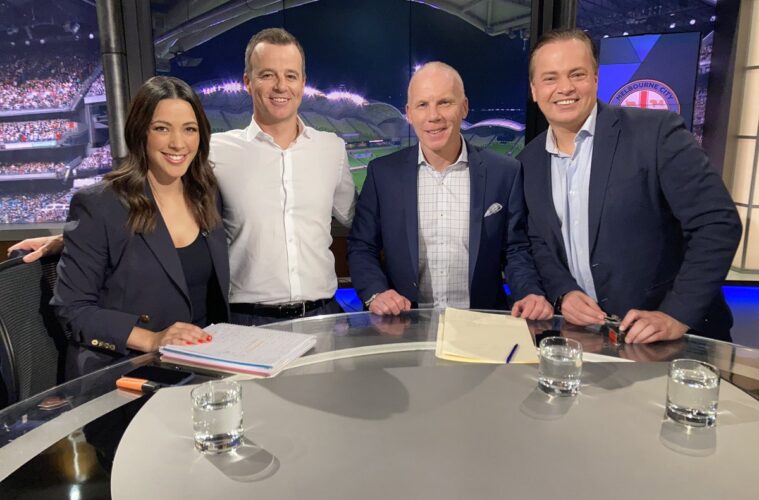 Melbourne City’s 3-1 win over Sydney FC in Sunday night’s A-League Grand Final provided one final addition to Fox Sport’s catalogue of showpiece deciders, farewelling what was an extraordinary 16-year partnership between the local game and broadcaster.

Criticism of Fox’s commitment over the past two years as finances and resources have waned has not been unjustified, but the denouement should in time be overshadowed by their monumental contribution to the game as a whole, which began with its rehabilitation following the NSL’s disbandment.

Fox and the A-League – and the W-League, Socceroos, Matildas, Asian Champions League et al. – have been twinned for so long it seems amazing to recall just how humble the beginning was, as long-time host and latterly commentator Adam Peacock reminded Box2Box.

“In the first season they didn’t actually broadcast every game, it was a really minimalist TV deal, under a million dollars it was worth. It was all production costs paid for by Fox, but it was only two or three games a weekend”, said Peacock.

“I think they realised, especially after that first grand final ‘wow, this is what it can be’. 40,000 people at Sydney Football Stadium, Dwight Yorke playing, Steve Corica scoring that goal, that was where it really took off.”

“People cottoned on to the fact the A-League had rejuvenated the sport in a professional sense, to make it more commercially viable… in terms of what the A-League was as the shop window product Frank Lowy envisaged, it certainly worked with the help of Fox Sports.”

Such major change will always cause a degree of angst, but perhaps this has been alleviated with the game’s move to Paramount+ and Channel 10 sewed up, optimism renewed. It’s left the Fox book to close in a satisfactory manner, and allowed time for reflection on the positives.

Peacock will likely be most fondly remembered as the host of the widely-adored Match Day Saturday program, which followed their broadcast of the local game with the Australian broadcast of the English Premier League.

“There’s no real sadness about it going. Everything comes to an end and we’re all going to expire at some point, and this contract has expired. I’m just grateful to have been part of it for over a decade personally, and Fox Sports for the 16 seasons.”

Asked to pinpoint his favourite moment across the journey, Peacock pointed to the 2011 Grand Final between Brisbane Roar and Central Coast Mariners without hesitation.

“It’s hard to top the two-all all in Brisbane. Two minutes before kick off, [I said] to Robbie Slater, ‘tip and why?”

“I think two-all, too hard to split.’ Mark Bosnich chimes in: ‘I’ll shave my head if that happens!’

“I was doing the presentation that night. Standing there watching Graham Arnold standing alone… with the thousand yard stare, muttering, that sight will never leave me …it was an extraordinary night of drama, and we got a few of those.”