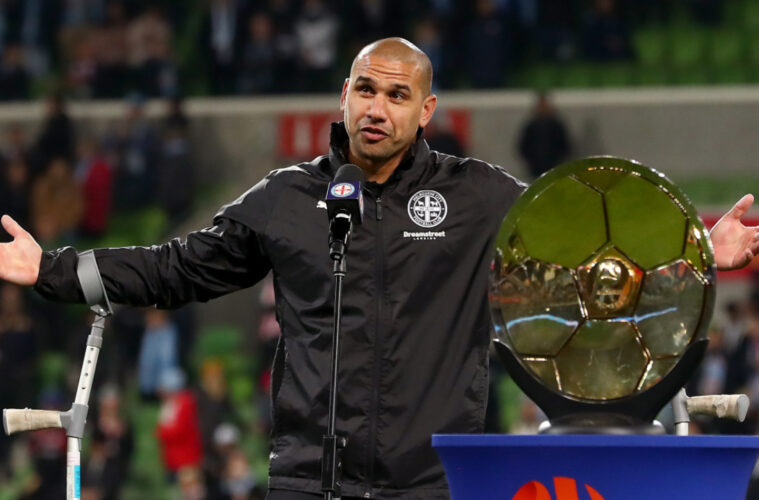 When the City Football Group acquired the ailing Melbourne Heart in January 2014, most in Australian football expected a trophy cabinet inundation at Bundoora.

Early signs were positive. David Villa was locked in for a guest stint, Frank Lampard was reportedly to follow, and glory looked a fait accompli for the cashed-up powerhouse in waiting.

But Villa saw out not even half of his 10-game stint, and in his wake came a string of players who teased and tempted, but never embedded themselves as the long-term legends fans craved. Aaron Mooy was required higher up the CFG pyramid. Tim Cahill and Bruno Fornaroli left on sour terms. Starlet Daniel Arzani donned the shirt just 24 times.

But this season, as they’ve finally lifted A-League silverware, it’s become clear the man who’s contributed most has been there all along. Patrick Kisnorbo saw the Heart’s dying days and City’s overhaul as a player, and has since ticked along in numerous guises on the sidelines.

Winning the 2018 W-League Championship with City’s women hinted at things to come, and this season he’s become the sixth man to win the A-League Premiership in his first season at the level.

“People forget I actually started in the academy before the W-League. I took over the under 20’s, so the W-League was sort of an extended coaching stint in terms learning the processes of a first team environment with full time players”, he told Box2Box.

“I was then an assistant for a couple of years, learnt a lot off Warren Joyce, a lot off Erick [Mombaerts]. Along the way there’s a lot of learning, a lot of mistakes that you make, but that’s all part of the learning process.”

“Now here I am getting an opportunity to coach as the head coach, it’s been fantastic.”

So what was it about the early days of the City reign that just wouldn’t click? Why did the condescending tag of ‘hearting’ it in big moments dog them, even as recently as last year’s Grand Final?

“I think when Man City and the CFG took over, they made clear their intent of what we wanted to achieve and what our identity was. But I think the difference [now] is continuity.”

“As a player and as an assistant coach I think the turnover of players was too many, whereas now as you saw last year and this year there really wasn’t [much turnover].”

“We’ve been able to keep our core squad together, add a few players that make a difference, but it keeps that continuation within the playing group and the club. And we train to get better with the group that we’ve been with for two years.”

While Kisnorbo’s achievement deserves high praise, he’s the first to admit he’s been the beneficiary of a diverse, accelerated apprenticeship under his two predecessors in City’s top job, Warren Joyce and Erick Mombaerts.

“Joyce taught me a lot about managing players, what to look for, the behaviours [to succeed]. With Erick, he came in and brought in a City-style of play that now we stick to no matter what.”

“Their ideology of football might be a bit different, but what they see in a player is very similar. They were two different managers with two different ways to see it, but with the players they wanted in the club, they were exactly the same.”