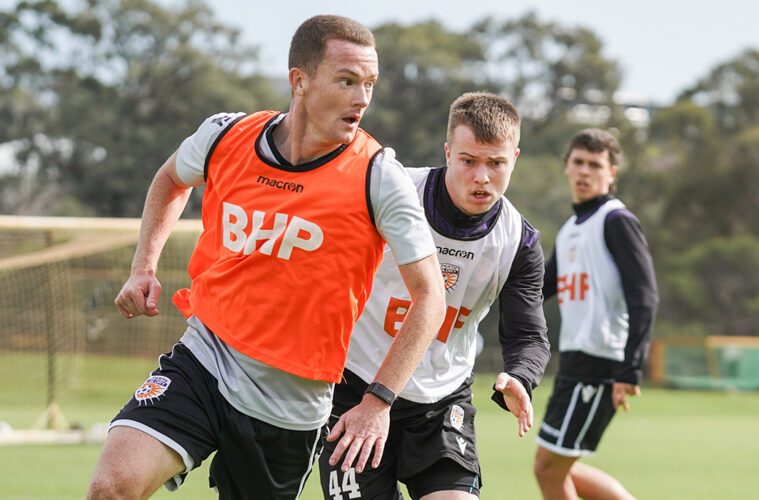 Brandon O’Neill is home, happy and raring to go for Perth Glory ahead of the new A-League season, which will be the first of a three-year deal inked in June.

When O’Neill ended his decorated five years with Sydney FC for South Korea’s Pohang Steelers in January 2020, the foundations looked in place for a lengthy stint abroad.

Not two years later, he’s back home. But the challenges faced and lessons learned in the interim have taught him more than many will grasp in decades.

“It’s been a hell of a journey, I’ve learnt a lot about myself. Leaving Sydney I knew of my dad’s condition, he had stage 3 lung cancer at the time. He was my biggest fan, my inspiration, and the first one kicking me on the flight to get to South Korea.”

For a fleeting moment, O’Neill was at the centre of the football universe. The K League was the first to resume globally following the Covid-19 pandemic, and he acquitted himself well in the first half of the season.

“But within the space of eight months dad was hospital bound. We received a call in Korea giving us the news that the diagnosis changed to terminal… Me and my wife, Nicole, looked at each other and said we need to get back and see him.”

“He was given a few months, which was really all I needed to spend some quality time with him. He got a little bit better in hospital as I neared the end of my quarantine.”

“I got out and had two of the best months of my life with him. Every day waking up, having a coffee, doing father and son things. Having life chats about things we never really touched on.”

Opportunities abroad called again, this time with Thai powerhouse Buriram United. O’Neill was torn between living each day with his family, and securing a future for he and Nicole.

“To leave my best mate, a terminally ill person, was one of the hardest things I’ve ever had to do. But again dad being dad, he was the first one to kick me on that plane. The life chats we had before that deal came made things a little bit easier in his eyes.”

O’Neill was again living the dream. He slotted in mid-season at Buriram, who’d won seven of the past thirteen Thai titles, in a football obsessed city.

“It’s just an out-and-out football town, there’s not a person who doesn’t go out without a football jersey on. You see young lads walking in the shops with full kit on.”

“They had 45,000 to our last four games (post-pandemic). It was the closest thing I’ve ever felt to European football. The atmosphere, the noise, was absolutely incredible.”

But the twists would continue, and the joyous news of Nicole’s pregnancy was paired with a sharp reminder of their surroundings, and home began to lure them once again.

“It came to the end of the season, we were away in the off-season, and we got the best news a husband can get, that we were expecting our first child.”

“Within a day of being told that Nicole got violently ill, and you forget Thailand probably hasn’t got the best medical systems that Australia has. We got Nicole home [from hospital] but the next day got the call from my mum saying my dad had been given a few days.”

Five months on O’Neill is back in purple with the Glory, where he cut his teeth between 2011-15 before moving to Sydney. Under the management of former teammate Richard Garcia, he’s delighted to be back amongst his nearest and dearest.

“Leaving Sydney a couple of years ago I never thought my journey would take me on a life changing experience, for myself and my family. I’m very happy and very excited to finally be home.”