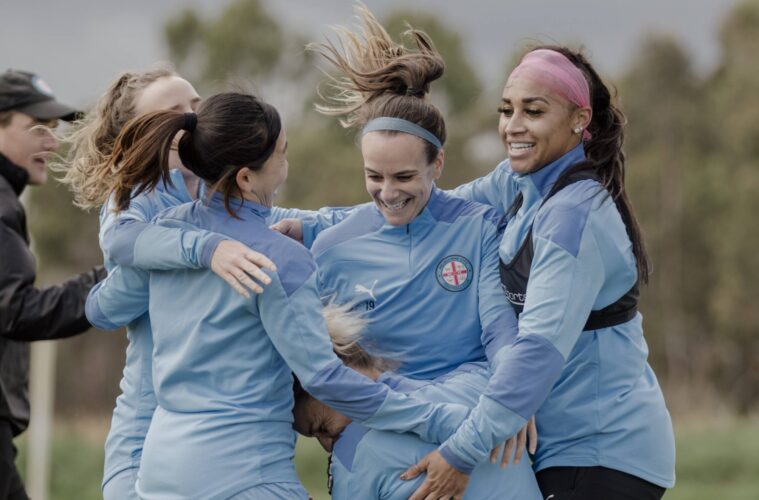 The Matildas back-to-back hidings at the hands of Germany and The Netherlands last month brought the perceived lack of depth in their ranks into focus, with doomsayers fearing a drop-off similar to that experienced by the Socceroos post-Golden Generation may await.

Melbourne City’s US import Samantha Johnson subscribes to this view, and is better placed than most to comment having witnessed the development pathways in both her home country, and here across her extensive W-League career.

While it may seem logical to simply blood players as early as possible to accelerate development Johnson believes younger is not always better, with Australian players lacking the ‘finishing school’ approach of the college system.

“Our bodies go through a different stage of development at college because there’s so much emphasis on fitness, strength, being the fittest, fastest team you can. A lot of the ‘winning’ mentality is established in college”, Johnson told Box2Box.

“Our peak as female footballers is not even until we’re 25-26, so we’re really so much older than the worldly competition that they face because they’ve been professional maybe 2-4 years, whereas they’re facing girls who are maybe 17-19 or early 20’s.”

“So they technically, around the world, have more experience at the professional level, but our bodies are more mature than everybody so we kind of just bully people.”

A college system won’t be arriving here any time soon, so what can be done to expand the player pool? Johnson is certainly not the first to posit the W-League may be too short, but has offered that treating the nine-month NPL window as the bona fide contest would raise the level, and therefore enhance growth.

“The NPL is 8-9 months long, which is exactly the timeframe we play NWSL, but I feel that’s the timeframe you can invest more money and funnel the talent through there because you have them for longer.”

“The W-League would then kind of be just an offseason bit that people maybe want to, or don’t want to do.I just feel the system’s a little bit backwards. The lack of talent you already have to work with is going to show… when the current players retire.”

Even that option would take a generation to implement and bear fruit. If trouble really is on the horizon how to bridge the gap quickly? Johnson has a nuclear option – sacrifice the Olympics as a senior exercise and send the kids on a fact finding mission for when the real stuff rolls around.

“[The Olympics] does kind of deter the actual progression of the young ones because you don’t want to be putting on your kit as a national team player at the World Cup [for the first time]. You want to have games under your belt, go through a tournament of similar style.”

“They need to model it a little bit on how they do the men’s side, they send the Under 23’s all the time, so it’s just giving people more opportunity [at major tournaments]. I think they can then just focus on where football actually exists, which is the World Cup.”