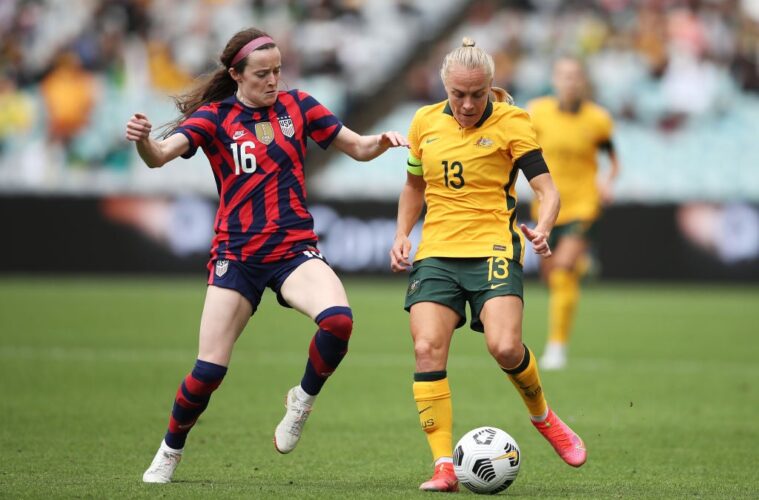 The Matildas will enter January’s Asian Cup with significant questions surrounding their defence, regarding both structure and personnel, after the United States feasted on the side’s second string backline in Sydney and Newcastle.

With mainstays Alannah Kennedy and Clair Polkinghorn absent for the first match Tony Gustavsson threw teenage duo Jessika Nash and Courtney Nevin into the fire, before plugging the exposed issues with world-class left back Ellie Carpenter in the second.

A theory on youthful selections runs that diamonds are made under pressure and in a friendly, there is never too much to lose. The inconvenient reality on this occasion is there was little other option, stemming from the depth issues that has become a calling card of the side.

‘In a perfect world where Australia has had a functioning youth system for girls and women for the past decade, Gustavsson doesn’t have to try to blood a 17-year old debutant in the centre of defence against the reigning world champions. Clearly that’s a problem area’, Joey Lynch told Box2Box.

‘The likes of Catley, Carpenter moved in there and they will do a job, but I’ve described that… as like having a Maserati and using it exclusively to do the school run.

‘You look at Jenna McCormick, who is playing week in, week out in Europe, after a disrupted A-League women’s campaign, does she deserve another shot? Emma Checker, do you bring her back ostensibly in her prime at 25?’

Lynch diagnosed the defence itself can’t be solely to blame, with a disconnect in midfield often seeing the ball turned over, leaving the last line scrambling at short notice as the opposition transitions.

‘Gustavsson is trying to change this, but traditionally the Matildas have been a very transitional side. They get out [of congestion] quickly, move at pace, and they haven’t been able to grab the midfield by the scruff of the neck and control games.

‘The problem is if you can’t control the game in midfield, and you can’t effectively manoeuvre the ball from defence to attack reliably, you are going to turn the ball over in poor positions, and that will lead to opportunity for the opposition in transition, which we have seen repeatedly in 2021 really hurt the Matildas.

Despite the results the matches represented another peak in public goodwill: the 36,000 that attended last Saturday’s opener broke the Matildas’ standalone attendance record, while another 20,000 turned out in Newcastle.

Realistic or not, there are large portions of those crowds who are indulging in the idyllic end to this cycle, to see the side win the World Cup at home in 2023. As the USA breezed through the lines to pile on three goals in Sydney, then add another in a similar manner in Newcastle, they wedged the divide between expectation and potential outcome ever greater.

‘If you looked at the marketing and hype, you would have been expecting very close contests and for the Matildas to possibly push the United States all the way. It was being hyped up as a dress rehearsal for the Women’s World Cup final.

‘Inevitably in one’s mind that creates images of a triumphant green and gold outfit lifting the trophy on home soil in 2023 so your expectations, perhaps subconsciously against your better instincts go towards good things.

‘[Conversely], Gustavsson talked [pre-game] of continued experimentation, bringing in youngsters. So it kind of existed in a weird space where there were two separate realities surrounding the games.’