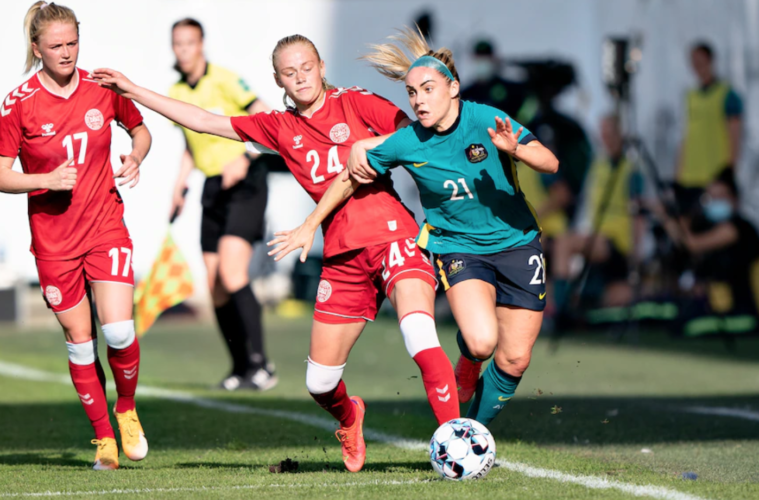 The Matildas friendlies against Denmark and Sweden quelled some of the stress that arose from Tony Gustavsson’s first camp in April, but still left plenty to be desired ahead of next month’s Olympics.

A late rally against the Dane’s softened what had been a three-goal deficit to a 3-2 defeat, the highlight coming as Mary Fowler opened her international account from distance.

The follow up performance saw a clean sheet on debut for goalkeeper Teagan Micah, although the inability to hit the net at the other end meant that joy sat alongside frustration.

“Did we see enough? No, not for mine. I think if we’re going to be truly competitive on the world stage we want to see a whole lot more”, The ABC’s Stephanie Brantz told Box2Box.

“But, you’ve got to take into account the mitigating circumstances. Gustavsson did have a harsh introduction to life with the Matildas… but he specifically chose some really tough teams for them to play to get a handle on exactly where they were at.”

Brantz nominated the performances of the inexperienced Fowler and Kyra Cooney-Cross as the highlights of the camp, and advocated for their inclusion in the Olympic squad to fast-track their development.

“I would take Mary Fowler… you can’t go past that absolute belter we saw a coupe of games ago. She’s shown she’s not scared of the big occasion, a promising start for her.”

“I would certainly be looking at Cooney-Cross, another one who showed so much promise in the W-League season and then built on that in the last couple of games.”

With Olympic squads capped at just 18 their selection would almost certainly come at the expense of those who have been vital to the side over the past decade, with Kyah Simon and Elise Kellond-Knight in particular on the fringes of the squad. With focus not only on the present but the 2023 World Cup, Brantz feels that type of exclusion harsh but necessary.

“There’s not that much time between the Olympics and the home World Cup. If we want a strong performance, we’ve got to see those players in these sorts of tournaments now.”

“Whether or not they get onto the podium is one thing, but building cohesion in a team Tony wants to take forward is the important part. He’s really got to be quite harsh in his assessment of who is going to be at their peak in a couple of years time.”