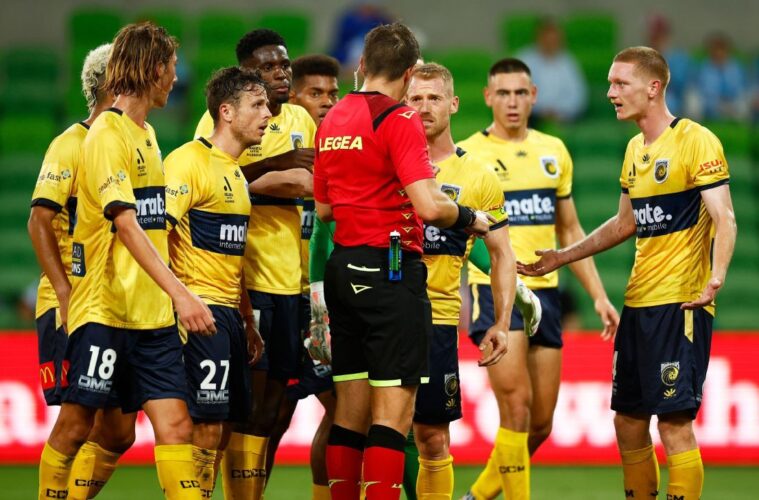 Optimism has given way to frustration, patience to discontent. The A-League Men’s and Women’s competitions have drifted from public consciousness in their first full season under the Australian Professional Leagues, hampered by the offerings of new broadcast partners Paramount+ and Network 10, and the APL’s football news platform KeepUp.

Following the game’s divorce from long-time broadcast partner Fox Sports, a relationship that soured badly at its conclusion, there was great excitement about what the deal could bring. Now three months in, it could still hit the heights, but it’s become apparent the game will take a big hit on transition.

‘The goodwill has well and truly evaporated for a lot of fans, myself included’, For Vuck’s Sake’s Dave Srhoj told Box2Box.

‘Coming into this season it was probably the best I’d felt in eight or nine years, since the period of 2011 through 2015 when you could argue the football in the A-League was at its peak. I’ve always been an optimist, a glass half-full guy, but it’s getting very hard to remain so.’

‘When you factor in [the delivery of] Paramount+, Channel 10’s mid-game ads and various other compounding factors, I’m now the most pessimistic I’ve been since the competition started. I think if things continue heading the way they are, people will start heading away in their droves.’

The greatest disappointment has been Paramount+, which has delivered a bare bones streaming interface without features fans had previously taken for granted such as the ability to pause and rewind live matches, or start them from the beginning on demand.

It’s now evident not everyone understands what is required to deliver these features, but compounding the problem has been the platform’s silence on the matter. The APL have been forced into conciliatory public statements, promising the infrastructure is on the way.

‘Football fans are savvy. We have to consume various streaming platforms and there’s a minimum expectation of being able to start from live or from the start. They’re options you get on Optus Sport or Kayo, and it’s fairly elementary stuff in the world of digital platforms.

‘As for the lack of communication, well, that’s just preposterous at the moment. If Paramount wasn’t bundled into our memberships and subsidised the way it is I feel a lot of people would cut their losses and start to look at illegal means of watching these games, and that is a risk to the integrity of the league and the clubs.’

Issues have also arisen from the league’s entry back into the free-to-air market, which for the first time is with a commercial network, Network 10. Part of the agreement sees one advertisement shown during play, each match; when a goal hasn’t gone in, it’s been crow-barred into an extended VAR delay or unnecessary drinks break.

The APL have this week declared the situation fixed, but it was an embarrassing episode that left them looking desperate, open to manipulation for commercial gain. In a free-to-air live sport market dominated by the compatible AFL and NRL, football’s rhythm has jarred.

‘The APL should be counselling the people at Paramount and 10 on what it is football fans are interested in, and what are non-negotiables when it comes to watching a match. People are piss-taking left, right and centre with regard to commercial breaks after goals, so they’d better wake up and smell the coffee soon.’

The APL’s KeepUp news platform has also gone down like a lead balloon after being released as a minimum viable product, which managing director Danny Townsend has declared sits at just 20% of its capacity.

Unable to deliver basic information around fixturing, more important than ever given the frequent rescheduling of matches, the product has developed a stink that will be hard to overcome.

‘I understand IT project management and just how difficult these things are, but unfortunately I don’t know where to go in terms of fixturing. It’s very clunky. There’s some good people involved in it and I know they’re working extremely hard to get this up and running, but for football fans, patience is running very thin.’