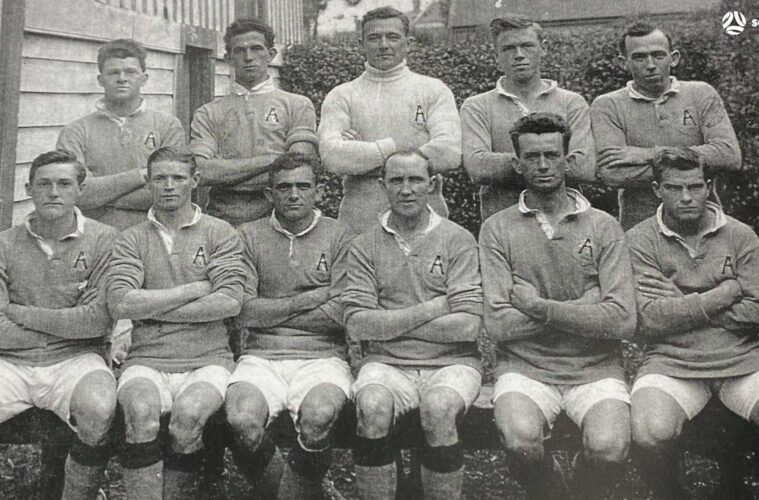 The centenary of the Socceroos’ first Test matches against New Zealand will be commemorated this September with a pair of friendlies either side of the Tasman, starting at Auckland’s Eden Park on September 25.

The names, personalities and feats of that first Australian national football side, who played the first of what are now considered ‘A’ Internationals in Dunedin, Wellington and Auckland in June-July 1922, don’t hold anywhere near the weight they deserve in Australia’s rich sporting history.

Nevertheless, they thoroughly deserve their due, and that history has now been retold by Trevor Thompson and Nick Guoth in their new text Burning Ambition – The Centenary of Australia-New Zealand Football Ashes.

‘This is part of how our story has unfolded over well over a century. If you go back to the late 19th century and follow it through, we’ve always had waves but then crashes on the sand, it’s been that kind of history’, Thompson told Box2Box.

‘We might take some small satisfaction in that we are at least acknowledging this history now, we are talking about it. Unfortunately for our brothers and sisters across the water in New Zealand, football is even lower-key than we’ve become used to.’

Central to the initial partnership but subsequent neglect of the relationship between the two football cultures is the sad case of the ‘Football Ashes’, a trophy for which the teams competed for thirty years from their second series in 1923.

The trophy consisted of a small box containing the ashes of cigars shared by captains Alec Gibb and George Campbell after the 1922 series, mounted on a wooden casket made of Australian maple and New Zealand honeysuckle, adorned with a kangaroo and silver fern. The trophy made the trip to the Gallipoli landing in the possession of Queensland Football Association secretary and soldier, William Fisher.

That such an ornament to the sporting and military history of both nations could be allowed to slip from public consciousness is a great shame; a prime example of Australian football’s historically underwhelming attitude to its own history, which also saw the infamous retrieval of the Australia Cup from a skip.

‘The trophy hasn’t been seen since the 1950’s. When it was first brought into being in 1923 it was meant to be a permanent reminder of the solidarity between the two countries. An emblem of rivalry, yes, but also the brotherhood of football cultures.

‘It faded away pretty quickly and after the 50’s it didn’t get mentioned at all. Nobody knows where it is, and that’s maybe symbolic of those waves and crashes, that there was a bit of a celebration in the form of the trophy… but it then disappeared. It’s a pretty good little physical indicator of the fortunes of football over those years.’

The trophy may never be recovered, but the football spirit between the nations can be revived and rekindled if enough people hold it dear enough, starting with the two friendlies in September. The matches will play a key part in the Socceroos’ preparations for Qatar, but ideally they’ll also spark discussion and discovery around captain Gibb, first goalscorer William ‘Podge’ Maunder, and others.

‘I think they’re people we should respect, we should know who they are, we should celebrate the fact that this is our foundation story. These are the people who made it happen, so when we go out on the field at the World Cup later this year, the players on the field will be bearers of this fantastic history and determination.’

‘The DNA that Graham Arnold talks about, we interpret in a certain way. But the bit I identify with most strongly is the fact that they just kept going, they never gave up, they made an international side, and eventually they found their place in the world.’