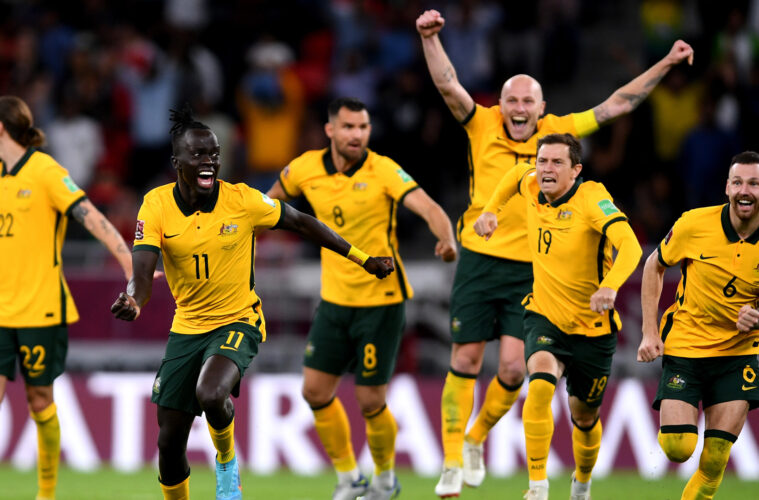 It’s hard to imagine the Socceroos path to World Cup qualification could have been any more difficult. Dragged out across 1008 days, the side were locked out of Australia due to the Covid-19 pandemic for all but five of the twenty matches, all while navigating border closures and red tape as manager Graham Arnold suffered the virus twice.

The sacrifice has been extreme, all while an unsympathetic Australian public largely wrote the group off as the campaign began to wobble in the latter stages. But all was made worthwhile, and forgotten, as Andrew Redmayne lurched to his right to deny Alex Varela from the spot in Doha, sealing the Socceroos place at a sixth World Cup.

Jackson Irvine has shouldered more load than most in playing seventeen of the twenty qualifiers, including every minute of the past week’s do or die wins against the UAE and Peru. Despite a significant late-game cramp, it was fitting that he remained on the pitch, in the cue as the penalties were thrashed out.

‘It is difficult to put into words, that feeling is impossible to recreate. It can only be experienced through these moments in football. With everything that’s happened over the last few years to come down to that one kick of the ball, the emotions were sky high’, Irvine told Box2Box.

‘The people that have been there and been part of it know what we had to do to get this done. There were a lot of tears, a lot of smiles, tears again, then when you come through at the end you’re an emotional wreck, physically and emotionally exhausted.’

Having worked his way into the Socceroos’ reckoning under former manager Ange Postecoglou, Irvine proved himself a reliable squad member at the 2017 Confederations Cup and 2018 World Cup, and was tellingly handed a start in the side’s toughest match of the last cycle, away to Honduras.

Following the retirements of Mile Jedinak, Tim Cahill and Mark Milligan, Irvine has stepped up considerably in this qualification cycle under Graham Arnold, forming something of an egalitarian leadership group with Mat Ryan, Mat Leckie, Aaron Mooy and Trent Sainsbury.

‘It’s something we talked about a lot in the build up to the last two games between a lot of the older players… we thought about the environment, and what we could bring to add an extra edge.

‘Although we do have a very relaxed culture among the group, what I will say is for the last two weeks, intensity has been through the roof with everything we’ve done. If you asked any of the players, anybody in the build up how the boys were feeling, they would have said ‘they’re on it’.

‘There was no doubt about it, we were on it from day one when we got into camp. We knew what the job was, what we had to do, and brought an extra edge. It’s not something we’ve lacked, but it’s something we needed to add for these two games.’
Irvine was famously a boy in the stands the last time the Socceroos won a penalty shootout, as John Aloisi and Mark Schwarzer made national heroes of themselves in sealing qualification for the 2006 World Cup.

Memories of that night at Olympic Park are readily recalled by any Australian sports fan worth their salt. It wasn’t lost on Irvine that he and his teammates have now carved history of their own, which will endure down the generations.

‘Something we’d tried to tap into were memories of previous Socceroos teams, what that means, the Socceroos itself as a culture. We talked a lot about creating our own moments, our own history, and being part of images like that that will live forever in sport and football in this country. The fact we’ve now had that moment for ourselves is surreal.’

Forever linked with that moment will be Redmayne, who after a decade as an honest A-League professional was thrown on for his third international cap by Arnold with the stakes at their highest. He delivered a dance, a save, and a wild grin to sum up the mood, as everyone watching around the world bar Arnold still wrestled with their surprise at seeing him there in the first place.

‘We were surprised, to an extent. We’ve practised penalties two-three times over the last two weeks knowing there was a chance we’d be in the situation, and Redders saved both of mine in the build up! So I was confident when I saw him coming on!

‘For Maty Ryan, it’s a testament to his leadership and the way he’s managed himself in the last few years, to walk off the pitch in such a vital moment, look at your mate and say ‘good luck’ when you didn’t know something like that was going to happen.

‘It’s the kind of person he is. It probably gave Redders all the confidence he needed to go on and finish the job.’