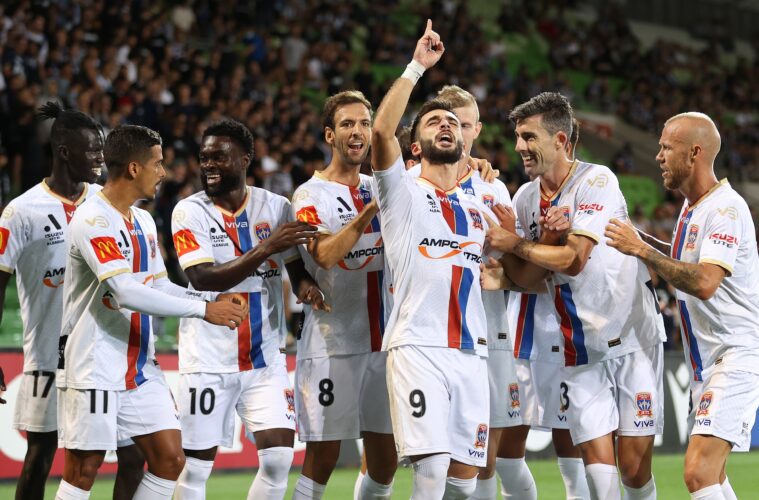 American investors Brett Johnson and Jordan Gardner appear on the verge of finally breaking into the Australian football market, with the APL reportedly in discussions with the duo to take over the Newcastle Jets by season’s end.

The pair could spell the end of the Jets’ demoralising run of ownership woes; the club have been owned by a consortium of rival A-League clubs since January 2021, in a noble but embarrassing look for the league.

Johnson is a director at Ipswich Town while Gardner is Chairman of Danish second tier side Helsingør, and together they’ve been eying off the Australian market for some time. In 2018 they financially backed Gold Coast United’s failed bid to return to the A-League, and last year showed interest in buying the Central Coast Mariners.

‘No one likes the situation Newcastle are in right now, being owned by several other club owners. It’s weird, it’s against the rules of FIFA and the AFC, so they’ve got a workaround there, but it’s not what you want’, The Sydney Morning Herald’s Vince Rugari told Box2Box.

‘I’ve been aware of Brett and Jordan for a while, and of their interest in the A-League. They seem to have a shrewd strategy about them, how to make money out of players being transferred overseas. They seem to be switched on in a good way, and seem like the kind of owners the A-League should be bringing in more of.’

‘I don’t know if these guys are going to come in and splash money around. Judging by their involvements in other clubs I don’t know if that’s their go. What they seem to be is solid, there won’t be any question about rent, pay being missed, and they seem to have a good network of contacts around the world.’

Adelaide United could also be in line for new owners after being linked with South Australian construction magnate Ross Pelligra. Like Johnson and Gardner, Pelligra signalled his interest in the game during the 2018 expansion process, when he backed the failed South Melbourne bid.

The Reds could be the latest in acquisition in Pelligra’s sports spending spree. In 2021 he bought Australian Baseball League side Adelaide Bites (renaming them the ‘Giants’), and released plans to develop a new basketball and netball facility for the Adelaide 36ers.

‘The Pelligra name is sort of everywhere in Adelaide at the moment. Ross is very active in development, and I do cock an eyebrow a little bit when I look at him buying the baseball team and the 36ers’ stadium. I hope this isn’t some sort of vanity ploy, because Adelaide needs good, strong owners.’

Any sale would at least move the club on from the near-four year mystery around their current owners, who are fronted by Dutch Chairman Piet van der Pol. While Adelaide are often held up as an economically viable, transfer savvy club with local talent on tap, Rugari believes this has come separate to, rather than because of, the owners.

‘Its bizarre, none of us know who actually owns the club, and that’s weird. It’s actually kind of disrespectful to fans and it shouldn’t happen. [Adelaide] have done some good things in recent times but they haven’t had heaps of money washing around that joint for a while.

‘It seems like Pete and his invisible consortium have been putting in the bare minimum to keep the lights on and it’s to the credit of guys like [former football director] Bruce Djite, who in the past have used talent coming out of South Australia in the transfer market to bring in more money.

‘You just wonder, if that’s what Bruce could do on a shoestring budget, imagine what new owners with serious investment could do in a place like Adelaide.’