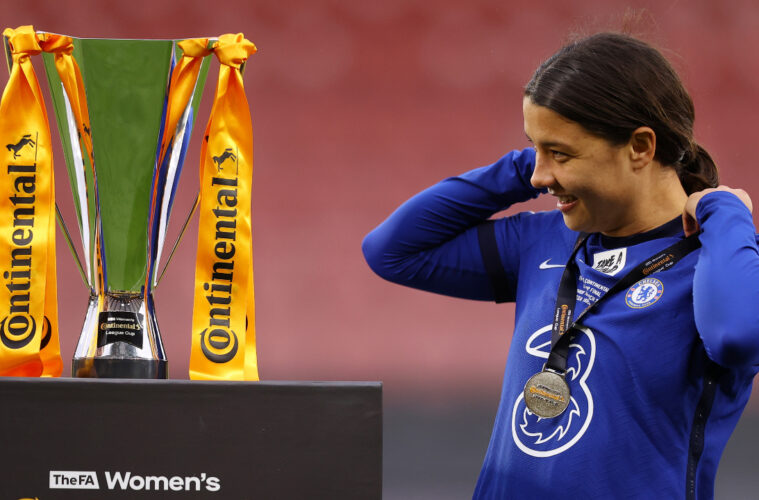 Sam Kerr and Ellie Carpenter are set to play key roles on Europe’s biggest stage this week as the quarter finals of the UEFA Women’s Champions League commence.

Life couldn’t be better for Kerr and Chelsea heading into their first leg against Wolfsburg on Thursday morning (3:00am AEST) as they sit top of their domestic league, having also won the Women’s League Cup final in emphatic style last week.

Having netted a hat trick in the 6-0 Cup final win Kerr has moved well beyond her early Chelsea performances that were seen as underwhelming to some, and looks primed to push deep into the Champions League.

“I think she’s slowly been building towards this moment. This is the biggest and most dramatic and the most expected moment of what people wanted from Sam Kerr”, Beyond 90’s Marissa Lordanic told Box2Box.

“I keep thinking back to the Community Shield [final in August 2020] where some media outlets labelled her performance as a ‘Wembley nightmare’ because she just could not find the back of the net.”

“To now see the progression, see how well she’s been doing not only in the Super League but in the cup competitions, in the Champions League… it’s awesome to see.”

Should Chelsea progress they may find themselves on a collision course with title-holders Lyon, who are gunning for their sixth – yes, sixth – consecutive Women’s Champions League title.

They do so this time with Carpenter firmly entrenched in the side, with their first leg against domestic rivals PSG also on Thursday morning (4:00am AEST).

“We all knew the Lyon move was going to be huge for Ellie’s career. One, because she’s so young and two because Lyon is an absolute powerhouse of women’s football.”