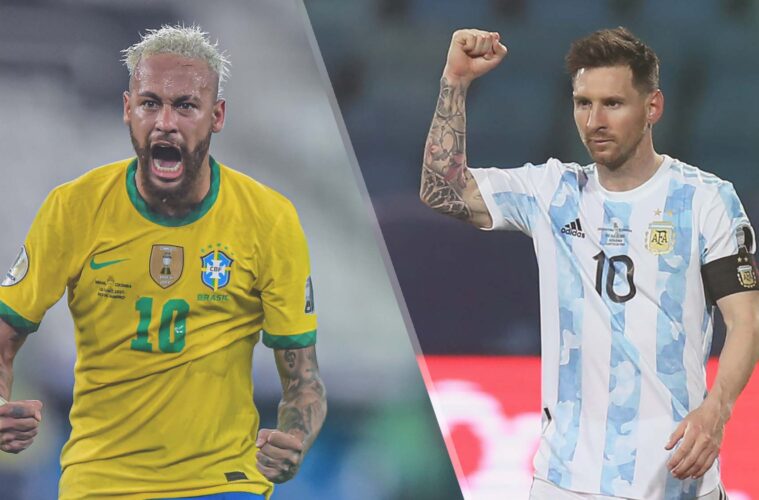 Brazil and Argentina will meet in their fourth Copa America final on Sunday (AEST) at the Maracana, having survived testing semi-finals to set up a mouth-watering clash on South American football’s biggest stage.

While Argentina won the first final between the two 3-0 in 1937 (when a final was only called upon to break a league stage tie) it’s Brazil who edge the ledger, following their dual triumphs of 2004 on penalties and 2007, 3-0.

A 20-year old Lionel Messi played in the latter of those defeats, and later captained Argentina in their finals losses to Chile in 2015 and 2016. That he’s now 34 and still without a major international tournament on his CV is lost on no one.

“It’s been a similar template to all of Argentina’s games this tournament in which they’ve started off really well. They have Messi in a glorious circuit of passing with Rodrigo De Paul and Giovani Lo Celso, but they can’t sustain it for the 90”, Vickery told Box2Box.

“Argentina’s last defeat was against Brazil in the semi-finals of the Copa two years ago. There were controversial decisions, but really the result was never in doubt, Argentina were picked off on the counter attack.”

“The fascinating thing about this game is the sides are much closer now. Argentina were very much a work in progress then, and they’ve got better and better since… but I think Brazil still have a better balance between attack and defence.”

While most sides entering a major tournament final have their system and selections set largely in stone, Vickery said both Tite and Lionel Scaloni face considerable decisions before kick-off.

“For Brazil, Marquinhos is a terrific centre back, but the big decision is who plays alongside him. Thiago Silva? Great player, but he’s not far off 37 and he’s starting to creak a little bit.”

“I think Tite should go for Eder Militao. His extra pace is useful defensively, and will allow the defence to press higher. Against that circuit of passing Argentina has in midfield, you want to reduce the space and defend a bit higher.”

“The way Scaloni usually lines up his team is a 4-3-3 with a midfield of De Paul, [Leandro] Paredes and Lo Celso, but it’s a midfield without a specialist midfielder.”

“In the semi-final against Colombia Guido Rodrigues, the specialist midfield defender, came in in place of Parades. What Scaloni could do in a 4-4-2 is pick both Paredes and Rodrigues. Whatever happens, I would make Brazil still narrow favourites.”