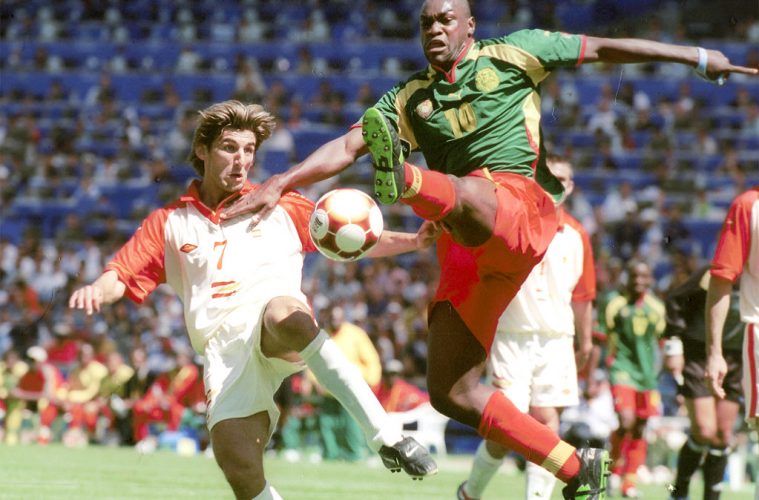 As Australia remembers the magical Sydney Olympics of 2000, the Box2Box crew spoke with Tim Gilbert, who was in the stands as one of the greatest football matches on Australian soil unfolded.

Ask any Australian football fan their thoughts on the best match played in the country in the modern era, and they’ll likely point to the Socceroos’ successes of 2005 and 2015.

But of those not involving the Green and Gold, the 2000 Olympics Gold Medal match between Spain and Cameroon is often said to be right up there.

On the pitch that day were future global superstars Samuel Eto’o, Xavi and Carlos Puyol; it was Xavi and Gabri who found the net in the opening half, ensuring Spain had one eye on the Gold at half time.

“The atmosphere was extraordinary and I think at half time, at 2-0 up, everyone thought they (Spain) have got this”, recalled Tim Gilbert, one of 104,000 at Stadium Australia that day.

But the script was flipped early in the second half when Samuel Eto’o and then an Ivan Amaya own goal saw Cameroon draw level.

“The first say five-six minutes (of the second half), bang crash wallop, it all happened for Cameroon. There was an own goal, they got their own, it was two-all.”

“As time went by there was a groundswell of support, all these Australians became Cameroonians for two hours.”

As the match drew towards penalties, Gilbert described the raucous crowd as ’80-20′ in favour of the Indomitable Lions, who were seeking Africa’s second football Gold Medal after Nigeria’s breakthrough win four years earlier.

“Everyone was yelling out ‘Rooney Rooney Rooney, Oi Oi Oi!’ It was one of those great moments, the Olympics throws them up all the time.”

Winning 5-3 in the shootout, Cameroon had gone from relative unknowns at the start of the Games, to Australian favourites in rapid time.

“Not everyone was au fait with Cameroon because there was so much else going on. They just quietly moved through and then went bang, into the Gold Medal match.”

It’s one of many memories fondly recalled about the period by not just Australians, but those around the world involved in the 2000 Games.

“Everywhere you looked there was a smiling face, every corner was a blue light disco. That football final was just dead set magical.”