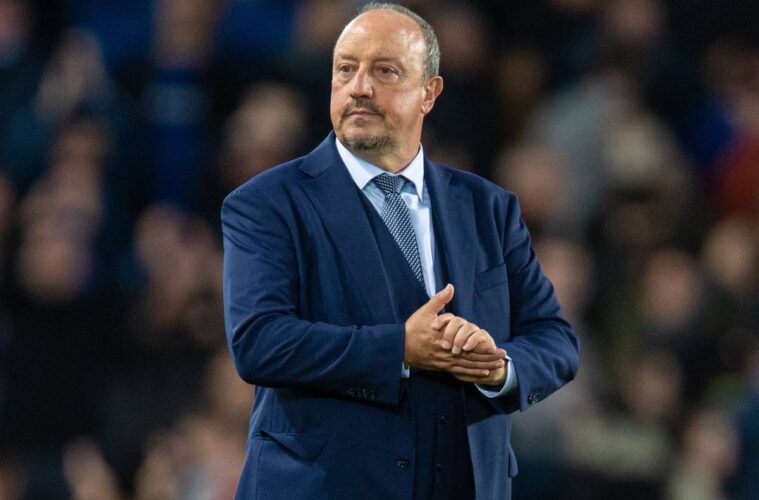 The sacking of Rafael Benitez failed to provide Everton with the new manager bounce they’d hoped for as they went down 1-0 to Aston Villa at Goodison Park overnight, as the distant concern of relegation continues to linger.

The Toffees find themselves sixteenth after twenty matches with just nineteen points to their credit. Although they have games in hand on those surrounding them on the table they’ve won just one of their past thirteen league matches, a run which will sadly stand as testament to Benitez’s miserable stint at the helm.

Former Liverpool defender Stephen Warnock played under Benitez during far happier times for the Spaniard, when he etched his name in legend at Anfield by winning the 2005 Champions League and 2006 FA Cup. He remains revered for those feats, but Warnock was unsurprised his methods have seen him come a cropper in the modern era.

‘That’s where the game’s evolved, in that players need an arm around them. They need to feel wanted and loved, and you’re not going to get that from Rafa. He’s cold and he tries reverse psychology, he tries not to give you any praise, so you try and gain it even more.

‘It was a brave appointment by Everton and brave by Rafa to think that he could step across the park to Goodison and try and make it work… but I look at Rafa and Jose Mourinho at the moment, and the sort of thing i see with both of them is they haven’t seemed to evolve with how football’s evolved.’

If the Everton faithful feel they’ve been unfaithful following a dalliance with a Red, the hierarchy could do little more to smooth things over than appoint Wayne Rooney. The Croxteth lad bookended his legendary career with spells at his boyhood club and in between times, while at Manchester United, admitted to dressing his sons in Everton pajamas.

Duncan Ferguson remains an alternative as the current interim boss and he, too, is Everton through and through. He took control briefly in December 2019 following the departure of Marco Silva, but Warnock is unconvinced Ferguson himself wants to take the plunge.

‘He’s never come out and said he wants the job, he always says he’s not ready for it, and I wonder why that is. Is it because he’s fearful of becoming Everton manager and not succeeding and losing his legacy as a legend at the club?’

‘A lot of Everton fans are saying ‘give it Duncan’. Well, he’s got to want to accept it first, but if he does I’d like to see how he gets on and who he surrounds himself with.’

‘The biggest name everyone’s talking about at the moment is Wayne Rooney. The fear is, ‘is it too early?’ But what you have to remember is the job Rooney’s doing at Derby County at the moment – he’s in a relegation battle and he’s thriving. So he’s getting the best out of players.

‘Everton have got quality in the squad. They haven’t got depth, but if a manager was looking at that squad saying, ‘do you think you can keep them up?’ One hundred percent. But there has to be a clear idea of how they play; sitting deep does not suit them, they don’t have an abundance of pace. But they’ve definitely got more than enough quality to stay in the league.’