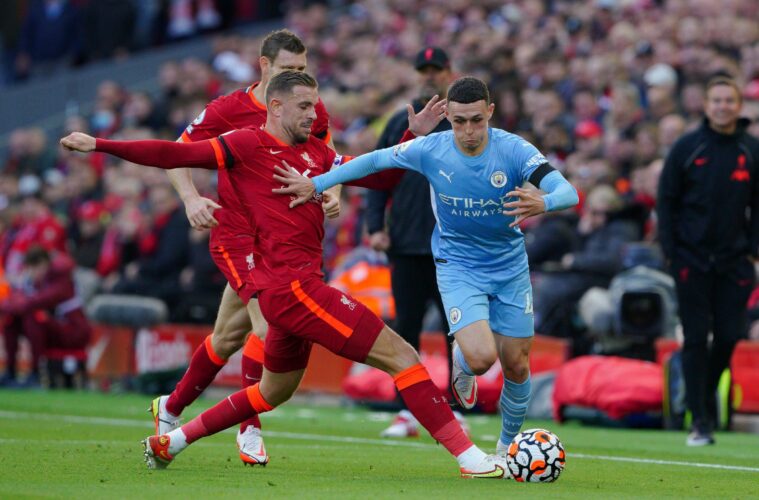 The Premier League title goes in the line this Sunday (1:30am Monday, AEST) when Liverpool head to Manchester City for what former Reds and England defender Stephen Warnock believes is now ‘the game in world football that everyone wants to see.’

The clubs have won the last four league titles between them, split 3-1 to Pep Guardiola’s City, although Jurgen Klopp’s Reds won the 2019 Champions League, the trophy that remains elusive for the otherwise all-conquering City.

City take a one point lead into Sunday’s clash at The Etihad, and given the extraordinary rate with which these sides accumulate points, it poses as a genuine ‘six pointer.’ Warnock expects the temptation of taking all three will prove too much for either manager should they for a moment entertain thoughts of conservatism.

‘I don’t think either manager knows anything different but to go for it. Every game both sides play they set out to win, whether that’s home, away, against a good opposition or not. I just don’t see either team sitting back, I think they’ll both go for it completely,’ he told Box2Box.

‘You think back to the game at Anfield and Liverpool went after City in the first twenty minutes or so. Then Guardiola changed his tactics and suddenly City dominated. Both managers will want to win this game, a draw won’t suffice. They want to stamp their authority and say ‘we are the best team in world football at the moment.’

That both sides also remain alive in the Champions League and are set to meet in an FA Cup semi-final next weekend is testament to the driving force each has proven to the other, pushing for simultaneous depth of squads and levels of consistency that seem to show no signs of abating.

‘They do need each other, the managers need each other, it’s spurring them on. It’s like competition for places in a team, you always need new bodies coming into the building to make sure it pushes you to the next level.

‘When you look at Liverpool’s squad, this is the best it’s ever been. We often talk about City’s squad being the strongest in world football, but I think Liverpool have overtaken them with the signings of Diogo Jota, Luis Diaz and Ibrahima Konaté.

As remarkable as Klopp’s Liverpool side has been, and while the record-equalling sixth European triumph and drought-breaking Premier League title will be long-treasured, there is a sense that for a group this talented to not to win at least one more league title would be underwhelming.

‘One thing Klopp has said recently in an interview, and Virgil Van Dyke echoed it, is that they want to win the league in front of fans, desperately. To celebrate it in the streets of Liverpool and have the parade, because they felt they missed out on that last time.

‘Your memories of winning trophies and games are of celebrating it with the fans, with people you love in and around you as well, and it almost feels a little bit empty to them that it didn’t pan out that way. It will be fascinating to see how it plays out this season.’