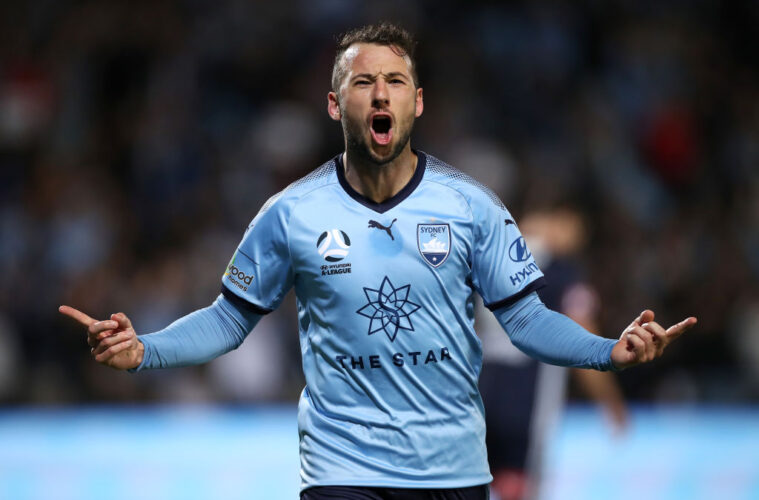 When Adam le Fondre left Sydney FC for Mumbai City in October, it was held up by many as the A-League’s harbinger of doom. While shrinking salary caps and smaller broadcast rights deals were being thrashed out domestically, the stability of the Indian Super League lured a glut of A-League talent.

le Fondre’s time in India was typically prolific; eleven goals from 23 games helped the side win the double. He returns to Sydney FC with the Australian game in a much better place, and his eyes firmly on one thing – adding yet more silverware.

“When I did leave it was very well documented I never really wanted to leave Sydney. It was just the uncertainty of how the league was going to go forward”, le Fondre told Box2Box.

“It was sort of left open-ended that if there was a mutual interest of me going back and them wanting me back it would be something we’d both look at. It had to be right for both parties and that’s what’s happened here.”

“I loved my time in Sydney. I’m hoping to come out of quarantine and pick up just where I left off.”

While full of praise for Indian football and it’s potential, le Fondre described his season with Mumbai as a ‘roller coaster’, admitting he wasn’t fully ready for the challenges living under Covid-restrictions would bring.

“Some days I would feel fantastic, and other days I’d feel a bit mentally drained from it and a bit homesick for my wife and children.”

“As a footballer… you take it for granted that you see your wife and children or your partner, that’s just common life. But in this situation I don’t think I was prepared for the mental challenges ahead of me.”

Having recharged at home in the UK le Fondre returns to Australia solo for now, but having signed a long-term deal with Sydney, will be joined by his family soon enough.

His next challenge will be functioning with fellow striker Bobo, the Brazilian who’s time at the club has alternated with his own, and will now overlap for the first time.

“He’s got a great record at Sydney, I’m really looking forward to working with him and working with Kosta [Barbarouses] again. I don’t think the headache is for me, I think it’s for the coach to decide how we line up.”