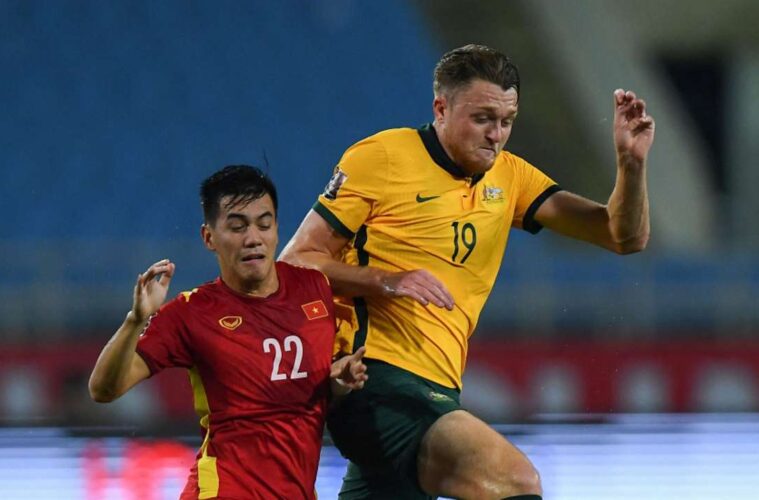 The Socceroos have taken maximum points from their opening two Third Round World Cup Qualifying matches to lead Group B, but drew derision from some quarters for a ragged 1-0 win over Vietnam.

High standards and robust debate are positive things to surround the national team, for they indicate a a public both engaged and invested. The aftermath of the win in Hanoi saw that public splinter into two: those that excepted the factors of heat and opposition quality played a part, and those that dismissed them as extraneous.

“Sport is about results and at the elite level, it’s all about results. Performance is important but results come first. 3-0 [against China], 1-0, six points, two clean sheets; what more do you want?” asked Scott Patterson, who plied his trade with Heidelberg & Brunswick Juventus in the NSL.

“We should acknowledge the conditions against Vietnam. 30°, 75% humidity, the pitch was very poor. I think Graham Arnold would have said ‘guys, have a shower, go back the hotel and lets talk about it some other time.’

Patterson indicated that after 16 years in Asia, there may still be a lingering superiority complex within Australian fans towards ‘smaller’ nations who haven’t traditionally contested World Cups.

“I noted Vietnam had a Korean coach [the vastly experienced Park Hang-seo]. A lot of these ‘smaller’ countries, not that they are smaller any more, they’re employing highly educated and trained people.”

“What they normally do is they sort out the defence first. The whole 5-4-1 scenario where you’ve got nine players each within ten metres of each other shuffling across the 18-yard line – good luck trying to break that down. They’re fit, they’re strong. They know how to defend.”

From a broader context Patterson remained realistic about where the Socceroos sit a fifth of the way through the group, and feels their place atop the standings could be misleading having played the two weakest teams thus far.

October’s window will see the side host Oman, most likely abroad once again, before a trip to the cauldron of Saitama Stadium, Tokyo, which hasn’t become any easier with familiarity over the years. Beyond that looms Saudi Arabia both home and away.

“Look at Oman, they beat Japan. We know Japan are rebuilding a bit after some of their world class players have moved on but they’re going to be very difficult, they always are.”

“Saudi Arabia could be the best team in the group so that’s the test now. To be honest I’d take one win, two draws. If we could manage five points out of those three, then take the six points out of China and Vietnam again, then we’re probably going to go through.”