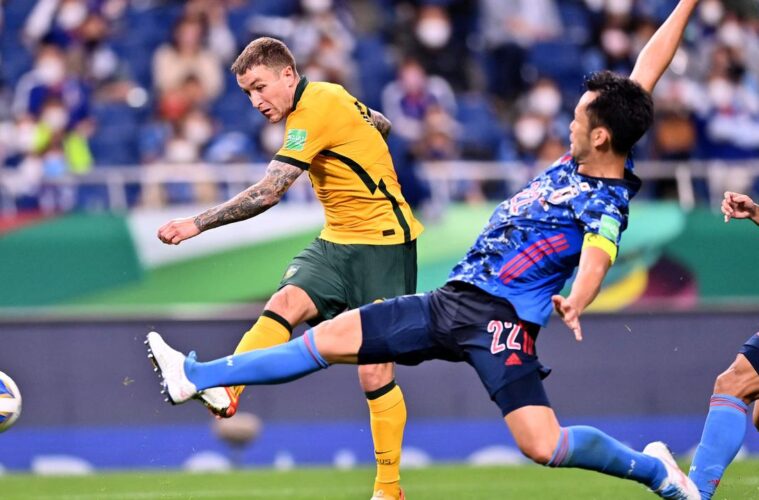 The Socceroos record-breaking run of World Cup qualifying wins was snapped at eleven by a hungry Japan on Tuesday night, whose 2-1 win revived their own campaign and temporarily eased the pressure on manager Hajime Moriyasu.

Graham Arnold’s decision to abandon the formation that had served him well throughout previous qualifiers came unstuck as Australia were consistently overrun in midfield, leaning heavily on Mat Ryan to keep them in the game until the closing stages.

The Asian Game’s Scott McIntyre told Box2Box one result has not removed the discontent around Moriyasu, but on this occasion his tactical nous clearly outdid that of Arnold.

‘The changes Japan made really impacted things, they shuffled formation to play in a three man midfield with the one ‘six’ and the two ‘eights’. Ao Tanaka, who played the right of the two eights, was really good and was driving at Aziz Behich all match.’

‘Perhaps the most curious one [for Australia] was why Awer Mabil wasn’t starting. It was said it was just a matter of managing minutes, the wingers in Boyle and Mabil have had a lot of work and travel.’

‘There are questions that should be asked as to why in such a big game there where personnel and tactical changes of such significance. I don’t know if it was an attempt to get more narrow and play through Japan, but I think Australia lost a lot of the width.’

For the hosts, the future of Moriyasu remains a major talking point; four games into the final round of AFC qualifying they find themselves in fourth, behind Oman for goals scored. Not since 1994 have Japan finished outside the top two of their final qualifying group.

‘A lot of the build up and post-match dissection has not been about the points won or lost, it was really all about the future of Moriyasu… there’s reports in various press that JFA sponsors are still unhappy with him and are pushing the JFA to change things.’

‘It was a performance from Japan’s players that was better in terms of intensity and overall commitment, there was a feeling there was something at stake. But I’m not sure it was the points that were at stake, it was the coach and therefore some of the players, and their role within the team.’

Across the rest of the group Saudi Arabia enjoyed their fourth win from four matches, this time against China, while McIntyre considers Oman a genuine chance to secure third position after their 3-1 win over Vietnam.

‘Oman have got some technically excellent players, and we’ve got to put in the fact the Omani league is in essence semi-professional, certainly not one that would be recognised around the world.’

‘I think it’s also an attitude thing. They’re not saying, as China have in a lot of their games, that they’re going to sit and look to soak up pressure and counter. Oman have said we’re going to have a go at Australia and Japan.’

‘Their coach Branko Ivankovic feels the middle-tier Asian sides are rising up, the top are perhaps not improving at the same pace, so the level across the board is really compacting.’

AFC Qualifying returns in the second week of November with Australia to play Saudi Arabia (possibly in Sydney) and China in Dubai, while Japan face trips to Vietnam and Oman.