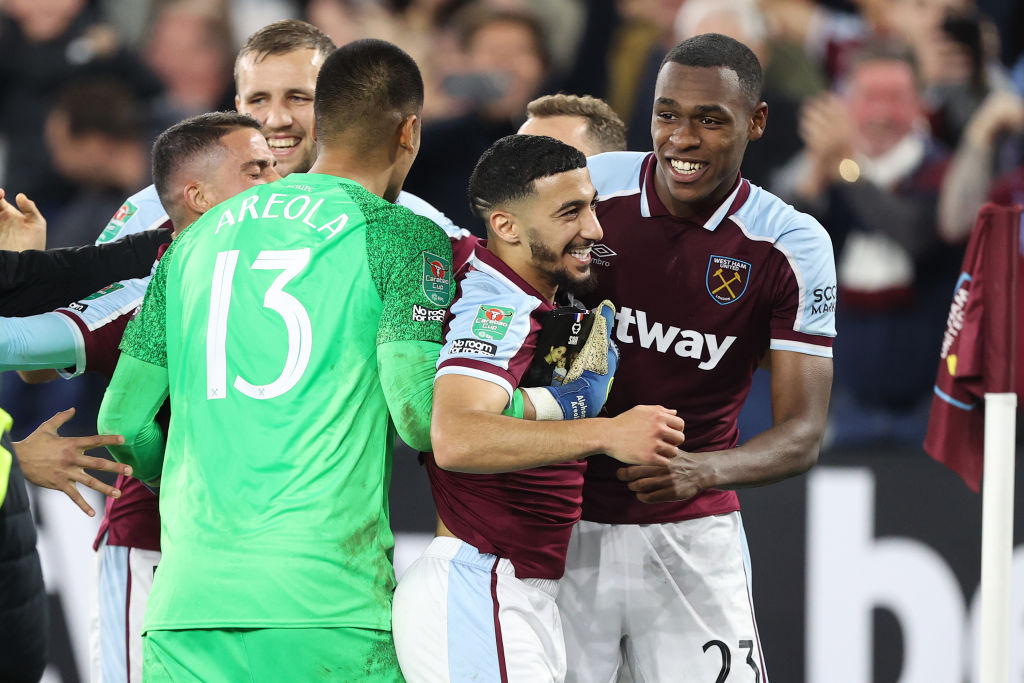 Manchester City and Liverpool dropping points has opened up a golden opportunity for West Ham to bridge the gap on the top three when they travel to Aston Villa, and extend an exceptional week that also saw them knock City out of the League Cup.

Only a heavy loss to Villa would see the Hammers fall outside the top four after ten weeks, form which has been supplemented by three wins from three in the Europa League.

‘It’s definitely starting to feel like home. The game where you went ‘you know what? It actually feels like home’, was the game against Rapid Wein (Vienna) in the Europa League, the 2-0 win’, The Athletic’s Roshane Thomas told Box2Box.

‘Then this week, during the win against Manchester City on a penalty shootout, the atmosphere was incredible once more. David Moyes always said he wants to make the stadium a fortress, and I think we’re starting to see that now.’

The fortunes of the club have served as a rehabilitation of Moyes’ reputation. Greatly respected after eleven years at Everton, he was widely written off as yesterday’s news during failed stints at Manchester United, Real Sociedad and Sunderland.

‘He was completely written off. Fans were saying ‘why on earth are we appointing this dinosaur’. But over the past 20 months he’s completely changed the club, enhanced his reputation, and last season he was in contention for manager of the year.’

‘I asked Pep Guardiola his thoughts on the match [post the City result]. He said ‘it’s great to see David get the respect he deserves.’ He’s always been a good manager… you’ve got to have self belief, and that’s what Moyes has always had.’

Plenty of clubs on mid-table budgets have had a season out of the box, qualified for Europe, and then been worn down the following campaign as fixtures begin to mount: Burnley and Wolves are two recent examples.

West Ham have so far managed to avoid this fate, although their League Cup progression will make things tougher again. They’ll play three further mid-week European matches before the end of the year before meeting Spurs in the quarter-finals prior to Christmas.

Provided they remain relatively injury-free, Thomas is convinced Moyes and co. have the foundations in place to fight on all three fronts.

‘That’s been the biggest thing Moyes has changed at West Ham. In terms of implementing a winning mentality, there’s a resilience, everyone has each other’s back.’

‘We saw [this week] when Saïd Benrahma scored the winning penalty he ran to the crowd and was embraced. A year ago, fans were like ‘Benrahma, when are you gonna deliver?’

‘Everything is coming together so well. Moyes and the coaching staff are definitely transforming the club, for sure.’