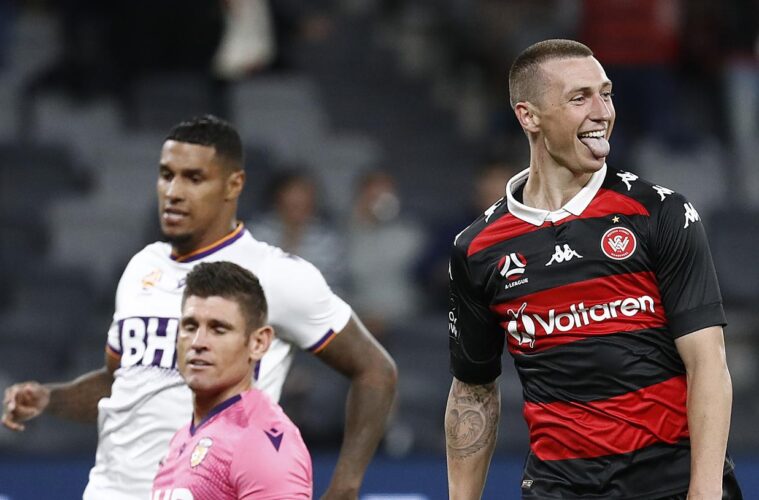 Mitchell Duke is proving just as successful in his second stint at Western Sydney as in his first, having netted four times in just seven outings heading into Saturday’s meeting with Brisbane.

After being denied the chance to lead the line during a fruitless spell in Saudi Arabia with Al-Taawoun, Duke has quickly cemented himself as the sole constant in Carl Robinson’s perennially shifting frontline.

But as Duke revealed to Box2Box, it was actually the lack of guarantee around his starting position that endeared Robinson to him. The Welshman had yet to join the Wanderers when Duke headed abroad.

“He made it clear to me, which I love, that ‘I want you to come back from Saudi, but that doesn’t mean I’m just going to start you, and that you don’t have to earn your position.”

“I think the way you perform and train earns that starting spot. I believe if I don’t score for a few games I deserve to be dropped, and he made that very clear to me as well.”

Banished to an undesired wing role in a 4-4-2 in Saudi Arabia, Duke took it upon himself to drive his return to Parramatta, having retained a keen interest in his ex-teammates from the Middle East.

“Once it hit the transfer window in January I started to put a few feelers out there and let the boys know if there was any chance that things could work out, I would love to see if that could happen.”

“It took until the end of January for them [Al-Taawoun} to turn around and finally say ‘ok, we’ll let you go on loan for the four months’. So I’m very happy it worked out in that way.”

Further benefit could yet arise from Duke’s return home, with his form placing him firmly in the frame for Graham Arnold’s bumper Socceroos squad for the World Cup qualifiers in June.

With five caps to his name, Duke dismissed the simmering concern held by pundits and fans around that assignment, with four games to be played in quick succession in temperatures that may climb towards 50°.

“I don’t know if it’s going to be too much of an issue to be honest. We have a good history playing in Kuwait, we’ve always done well against them.”

“We’re professionals, we’re fit enough to handle the conditions anyway. That [complaining] would just be an excuse.”

“I’m expecting big things in these four games. Hopefully I can put my hand up to be selected.”