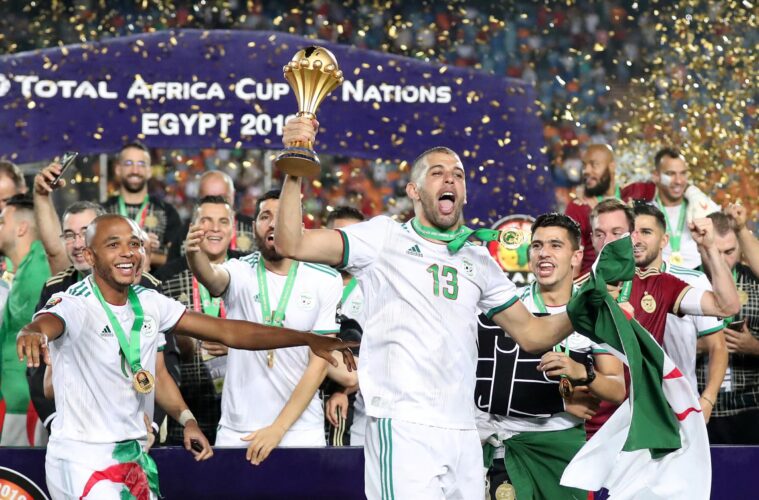 Monsoonal rain, Covid-19, player availability tussles and civil war have all stood in the way of the 2021 Africa Cup of Nations, but 24 sides have made it to the line in Cameroon to commence the tournament from Monday.

Expected to contend are Algeria, who arrive as defending champions less than a month after also lifting the Arab Cup, and two-time losing finalists Senegal, who have sat top of the FIFA rankings among African nations for the past three years.

Outside of that there is instability en masse; the recently completed second round of CAF World Cup qualifying saw six nations change managers either mid-way through, or in its aftermath. It leaves us with a sense that it’s anyone’s game, according to BBC Sport Africa’s Rob Stevens.

‘You’d have to say Algeria, the holders, and Senegal are the two standout teams for this edition of AFCON. It’s a fairly open field, and a few other countries that underperformed in their qualifiers changed coaches during or after the qualifiers’, Stevens told Box2Box.

‘If you look at previous winners, Ivory Coast aren’t having too good of a time and won’t be at the world cup in Qatar; Egypt have Mo Salah, but other than that can they get the rest of the team together to compete? It should be a fascinating tournament, for sure.’

To be speaking of football on the pitch will come as great relief for fans, administrators and pundits alike, for the barriers before this tournament were considerable. The January time slot has again caused consternation among European leagues, despite CAF’s best intentions to play it mid-year.

Premier League club Watford were accused of ‘baring fang’s by Nigeria over the availability of defender Emmanuel Dennis, who will not be in Qatar after Nigeria were found to have requested his release too late. Watford were not as fortunate in the case of Ismaïla Saar, who joined his teammates in Cameroon after an equally unhappy exchange.

‘There’s been a lot of chat about the timing of the tournament. With the pandemic players are playing a lot of games in a short period of time and clubs, especially Watford, don’t want to be losing their best players, especially when they’re battling relegation.

‘Watford won in terms of Dennis, but it looks like Sarr will go. There’s been rumours around [Nigeria’s] Odion Ighalo, that his Saudi Arabian club won’t release him either. In terms of the players, 99% of them are absolutely desperate to play in this tournament because it’s a huge thing in Africa.’

This is the first time AFCON has dealt with such club versus country battles, and the fact the tournament has fallen back to its traditional January slot despite originally being scheduled in the European summer is a reflection of the rigmarole experienced en route to kick off. Maybe Watford should direct their letters of complaint to the weatherman.

‘The next edition is supposed to be in 2023 in the Ivory Coast in June-July but again, that’s a tropical climate, so whether that will be moved in the future remains to be seen.

Covid-19 has of course enforced itself upon the tournament, with crowds to be capped at 60% for matches not involving Cameroon, in which case it can rise to 80%. Numerous teams including Cape Verde and Tunisia have also been compromised in their build up.

‘Cape Verde has said their coach Bubista has tested positive, and they’ve had to call off a friendly because they lost all three goalkeepers. One of them has still got the virus so he might be missing at the weekend.

‘[Tunisian] Seifeddine Jaziri has tested positive as well, so I think sadly it’s going to be a case of nations adapting and having to deal with that.’

But for all of that, posing potentially the biggest threat to AFCON is the Anglophone Crisis taking place in Limbe, in Cameroon’s south. Fighting has been ongoing since 2017, with separatists pursuing a breakaway state called Ambazonia. With a heavy security presence in the region, it is imperative the conflict remains separate from football.

‘The violence has killed around 3,000 people and forced a million to flee since 2017. There are worries about security in that region, but the security forces are confident the tournament will go ahead without any issues, and one can only hope that that’s the case.’

This tournament truly has faced more challenges than most to reach the start line. But with the bulk of players available, Covid-19 in check and civil war at arm’s length, it’s time for football to prove it was all worth it.

‘There are a couple of first-time qualifiers in The Gambia and Comoros, sides that will probably never have the chance to play at a World Cup, but here they are on the international stage. The players are itching to get into action.’