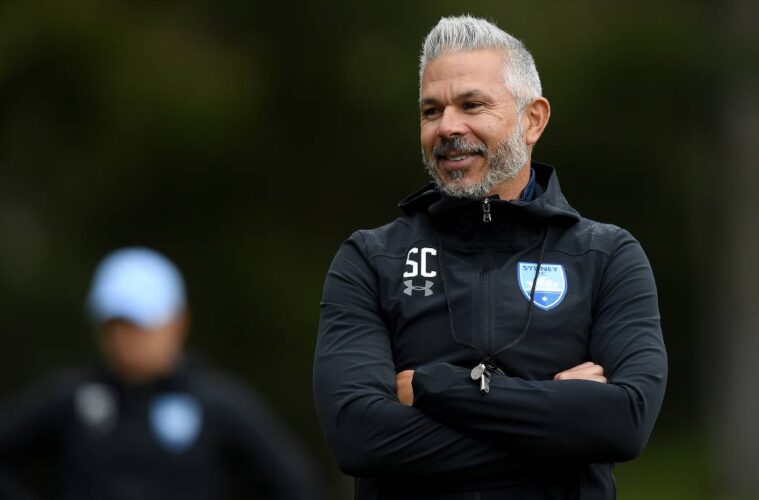 A month into the A-League Men’s season, questions were being asked as to whether Steve Corica had pushed the envelope on his senior squad a season too far.

In June, Corica’s side of accomplished but ageing stars were run off the park by Melbourne City in the grand final, in what looked the natural end of their era. But rather than opt for an overhaul Corica stayed loyal, resigning the likes of Alex Wilkinson, Anthony Caceres and Bobo while neglecting to bring in a big fish.

A fortnight ago it looked to have backfired. Sydney were again run ragged by a Mariners outfit that took the points 2-0, leaving the Sky Blue winless in their first four. But Corica held his nerve and proved he’d turned the squad over after all, leaning on Max Burgess, Trent Buhagiar and Patrick Wood to deliver a 3-0 win over Macarthur.

‘I don’t think our performance has been bad at all, except for the Central Coast game for the first half. We should have beaten Newcastle, we were 2-0 up and let that slip, and we’ve been playing well but we’ve had key players out at times’, Corica told Box2Box.

‘At the weekend we had more players out but the young boys stood up and did a fantastic job, it was probably our best performance of the season. It was nice against Macarthur too, they were on a good roll and have been defensively stable so it was nice for us to put on a good performance and score three.’

‘We’ve had two wins in a row now and we’re involved in the FFA Cup too, so there’s a lot of things to look forward to over the next little while.’

Chief among the reasons to be positive is the pending integration of eight-cap Socceroo Mustafa Amini, who returns to Australia after a frustrating end to a fruitful decade in Europe.

‘Musti can’t play until the middle of January but to bring someone in with that Socceroos experience, he’s played overseas for ten years now at some big clubs, Borussia Dortmund and in Denmark, obviously that helps.

‘He’s had his problems with injury, he hasn’t played a lot of games but from what I’ve seen so far at training he’s ready to go. He looks good, he’s training well, he’s still got a couple of weeks before his first hitout so hopefully he’ll be up to speed with the boys.’

Waiting to partner Amini in midfield could be Patrick Yazbek, who has hit the ground running in his first two starts. Along with the refreshed frontline that did the damage against Macarthur, Yazbek is perhaps why Corica was willing to stick with his experienced core, for if they did not deliver, reinforcements were already on hand.

‘[Patrick’s] on a scholarship contract but I really like what I see at the moment, he’s doing a fantastic job and for the last two games he’s been one of our standout players.

‘I think he can even bring more to the table. I think he’s got a few goals in him, he has a good shot and likes to get forward from midfield, so that would be nice if we could get him scoring a few goals as well.’