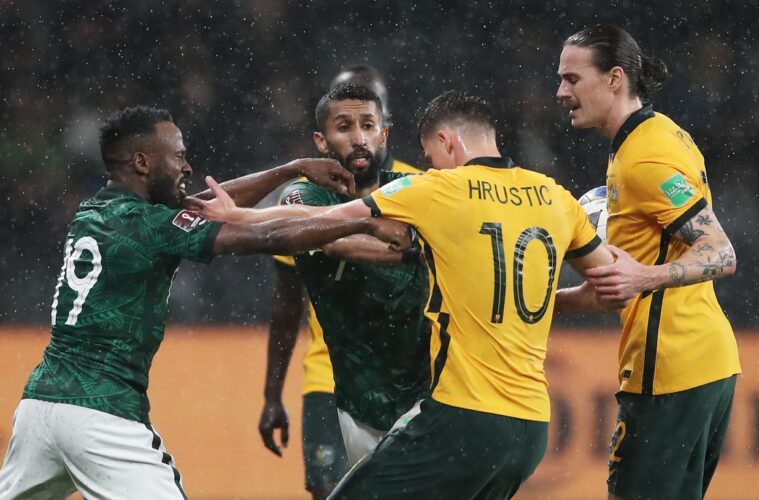 Japan have cut Australia’s lead in Group B’s second position back to just one point mid-way through the group, after defeating Vietnam hours after the Socceroos drew with Saudi Arabia.

As has so often been the case, the Socceroos’ inability to convert early dominance and multiple chances almost came back to bite them as momentum swung and Hervé Renard’s Saudi side piled on pressure in the closing stages.

Japan’s slow start to the group had afforded Australia breathing room in second but that’s quickly evaporated, with three points now non-negotiable from the Socceroos’ trip to Sharjah to face China on Wednesday (2:00am AEDT).

‘In the second half it’s a good job Maty Ryan turned up. There was another chance in the second half Saudi Arabia had where Harry Souttar dived in front of it, so they had their opportunities’, former Socceroos skipper Paul Wade told Box2Box.

‘Saudi Arabia still lead us but yeah, I’m not disappointed at all by the way we played. The chances we created, if only we could finish. This was a great game, I loved it, even though the result was not what we wanted.’

The inability to finish is nothing new for the Socceroos. Played in torrential conditions, this was the style of agonising arm-wrestle in which Tim Cahill would always make a telling impact.

The side were unable to score from open play under Bert van Marwijk at the 2018 World Cup with Cahill on the bench despite carving chances galore, and over three years on, Graham Arnold is no closer to finding a replacement to score against high-quality opposition.

Taking that into account, perhaps it’s unfair to rue their profligacy at Parramatta; this is where the team is at, and has been for a long time. What it does call into question is the decision to attack Japan late when on level terms away from home last month. The point let slip would have been handy now.

‘It always hurts when you get beaten by Japan, we expect to beat them and we’re disappointed when we don’t. When we look back at all campaigns there are moments where you say ‘if only…’

‘Hopefully this draw is not one of those we look back on and think ‘if only we’d scored one of those twelve chances that flashed across the face of goal.’

Praise is also due for Saudi Arabia, who look determined to redeem themselves for their disastrous Russian World Cup where after qualifying for the first time since 2006, were embarrassed 5-0 on opening night with the world watching.

This fourth trip to Australia was comfortably their best, earning their first result after losing 4-2 (2012) and 3-2 (2016) in the previous two World Cup qualification cycles.

‘I always take my hat off to any team that comes here and gets a point because you’re going to have to earn it. They had to defend a long, long time and they did.’

‘When you’ve got coaches coming from the other side of the world with tactics and bits and pieces of info, that brings teams closer together at the highest level. They were brilliant in possession, they created chances, I couldn’t fault them.’