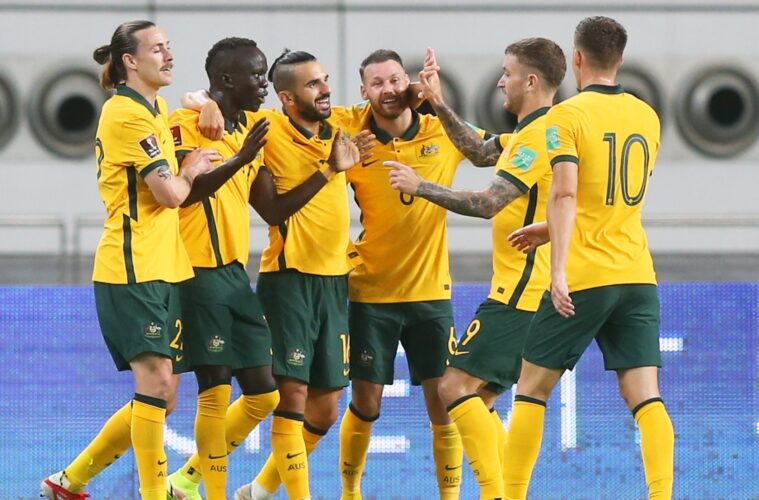 The Socceroos have made the ideal start to the third round of AFC World Cup Qualifying, defeating China 3-0 hours after main group rival Japan suffered a surprise defeat to Oman.

Australia’s interrupted build up to the clash included just two training sessions in Doha, so perhaps it shouldn’t have surprised to see them jumped by the lively China in the opening twenty minutes.

But at no stage was their real cause for alarm and the contest was ended with a one-two punch mid-way through the first half through Awer Mabil and Martin Boyle, before Mitch Duke added a third off the bench in the second half.

“I was getting a bit concerned, although I don’t think Maty Ryan or the back four were under any [serious] pressure. But up until that point, I thought ‘gee China’s playing good football”, former Socceroos skipper Paul Wade told Box2Box.

“Mind you… they had been together for twelve months and we’ve had two training sessions, so no wonder they were playing so well. But to go bang, bang in the 24th and 26th minutes, that took the steam out of them.”

Wade’s one concern from a night of overwhelming positivity was the make up of the midfield; Jackson Irvine, Ajden Hrustic and particularly Tom Rogic excelled against tame opposition.

But whether this is Arnold’s long term midfield trio, particularly against more pressing opponents remains to be seen. In any case Wade felt it only worked as Rogic was able to play so high up the pitch, vacating space for the deeper two to play the ball.

“With two in the middle it did work in the second half because Rogic went up and played alongside Taggart and Duke, and I loved that because it gave Hrustic and Irvine the chance to control that whole area. So I’m split on that decision.”

In the days preceding the clash the Socceroos path has seemed a little brighter, with it revealed the side will be allowed home for the first time in 22 months for October’s fixture against Oman.

What the future holds beyond that remains murky, but in their five successive qualifying victories on the road in 2021 a resilience and relish for the challenge has shone through, something Wade credits to Arnold for creating a driven yet harmonious environment in camp.

“A couple of years ago he came out and said ‘I’m not enjoying coaching because I’m putting too much pressure on myself, listening to too many media pundits who are looking for a story.”

“He went away, changed the whole outlook and said ‘I want to be here, I’m going to enjoy myself, I’ll get my players in a frame of mind where they’re enjoying themselves as well.”

“I think that’s reflected in the way they come together. It’s a beautiful balance of, ‘lookout, if you upset the boss you’re not playing’, and, ‘he’s your mate, you can have a joke with him.”

“Players never assume they’re going to be playing, there’s a certain edge all the time.”