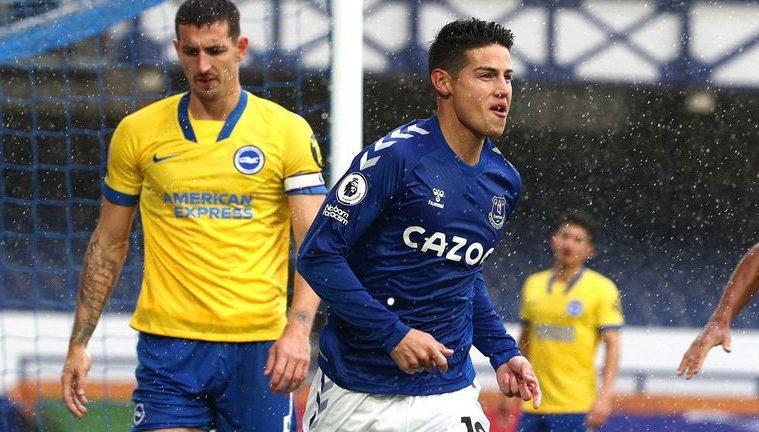 Everton have again moved temporarily top of the Premier League with a 4-2 win over Brighton, James Rodriguez and Dominic Calvert-Lewin on the scoresheet to make it four wins from four in the league this season.

It’s a feat the club haven’t achieved since their title winning season on 1969/70. Including all competitions they’ve won their first seven for the first time since 1894/95.

“More than anything, there’s a sense even temporarily that Evertonians have got their team back”, The Athletic’s Paddy Boyland told Box2Box.

“There was a bit of a dislocation, fragmentation between the fans base and the team on the pitch and you could see seeds of unrest growing [last season].”

“But now under Carlo Ancelotti not only are Everton winning games but they’re winning them in style, scoring lots of goals, carving out chance after chance, and that’s the football Everton fans want to see.”

Although their defending is far from water-tight, goalkeeper Jordan Pickford in the spotlight again against Brighton, 12 goals in four has managed to overshadow these concerns to this point.

The seamless introduction of James Rodriguez and the exponential improvement of Dominic Calvert-Lewin have been key factors in their rise.

“We know when James sets foot on a pitch he can do remarkable things with a football, and we’ve already seen that bear fruit since he joined.”

“We need to see if he is able to put in 20, 30, 40 consistent performances in the Premier League, [not] from a quality standpoint, more just in terms of how his body holds up.”

With nine goals in all competitions, Calvert-Lewin has gone from divisive talent to golden-boot contender.

“What we’ve seen since Marco Silva got the boot in December is a player learning how to be a poacher, to add that final bit of stardust to the toil, the effort, the aerial prowess.”