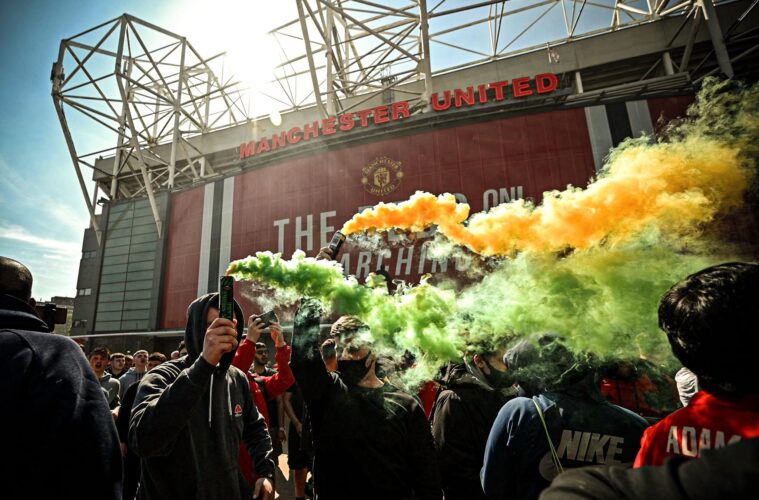 The European Super League may have collapsed inside two days but the aftershocks have continued to quake across the football world, with last weekend’s fan protest at Old Trafford demonstrating just how high tensions are running at Manchester United.

While the owners of Chelsea and Manchester City expressed contrition over their breakaway attempt United’s Glazer family initially reacted with trademark silence, stirring fans to vent ahead of last Sunday’s clash with Liverpool.

“The illegality, the trespassing, breaking into old Trafford, the police officer who sadly got slashed, that’s all bang out of order. But putting that to one side, the actual root of this is a 16 year disaffection with the Glazer’s ownership”, The Guardian’s Jamie Jackson told Box2Box.

“The profile of the game, Manchester United versus Liverpool, the fact that if they’d have lost Man City would have become champions, [it was a] bank holiday weekend, it all added to profile.”

Co-Chairman Joel Glazer’s post-ESL statement was the first public commentary from the family since their 2005 takeover, and Jackson explained their silence following the protests looked as if he’d already contradicted his promise to ‘listen more.’

In recent days however Glazer has penned a letter to the United fan’s forum, acknowledging his readiness to meet, and consider the fan ownership of shares.

“That apology was the first time the fans have been directly addressed since that initial interview in 2005. When there’s silence into that void, all sorts of interpretations come about. That comes across as disdain, especially when they promised to listen and speak.”