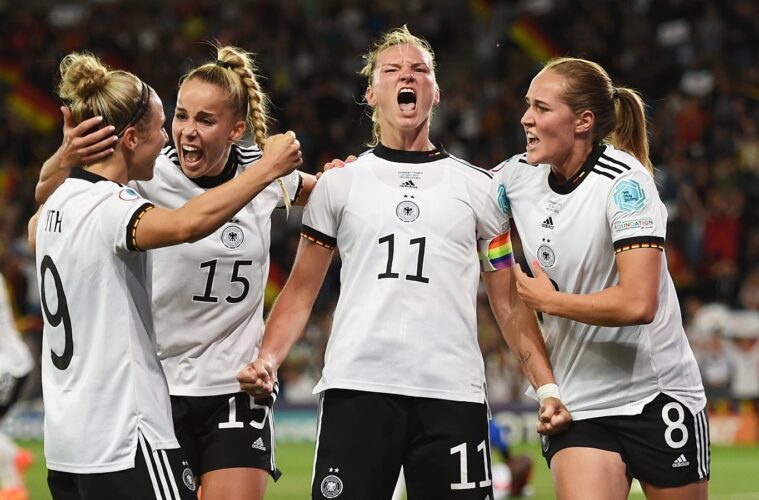 England’s Lionesses tonight have the chance to cap the Women’s Euro they’ve hosted superbly by lifting the title for the first time, but will be made to earn it by old foe and undisputed queens of the tournament, eight-time winners Germany.

Sarina Wiegman’s England advanced to the sold-out Wembley final after scrapping for their lives to overturn the highly-fancied Spain in extra-time of their quarter-final, before backing up with a 4-0 demolition of Sweden in Sheffield on Wednesday.

The German campaign has been spearheaded by veteran skipper Alexandra Popp, who after missing the 2013 & 2017 Euros through injury has made up for lost time with six goals from their five matches, including both in their 2-1 semi-final win over France.

The Athletic’s Nancy Frostick explained there is a sense in England their side has built their destiny through patient, considered progress over the past dozen years, with the ruthless edge Wiegman has added the ingredient they hope will get them across the line.

‘This is a repeat of the 2009 final which Germany won 6-2, so that was the gap [between the sides] at that point in time. Apart from that, the semi-finals was the best England had done, and to do it for four tournaments (World Cup 2015 & 2019, Euro 2017) in a row was a massive statement; of course we’ve gone past that now in this fourth one.

‘The question was whether they had it in them to go one further, to be a bit more ruthless and finish off those chances… they looked calm and assured [against Sweden], and I think that can only come from experience of repeatedly reaching that point. Also teams like Chelsea reaching the Champions League final, which a lot of players in the England squad were part of.

‘There’s also a bit of what Sarina Wiegman’s brought. They’ve talked about being more arrogant and clinical as a team for a few years, but it was never quite executed under Phil Neville. But under Wiegman it’s just relentless, we didn’t sit back when it was 1-0.’

In their way stands Germany, who breezed through the Group Stage and quarter-final without conceding a goal under Martina Voss-Tecklenburg, before digging deep against France. There should be no fears of the occasion, having won this tournament twice as many times as every other nation combined since its 1984 inception (in 1989 as West Germany).

‘We maybe weren’t expecting [this] from Germany coming in because they’ve had a couple of years where they’ve been rebuilding and evolving… but they’ve won this tournament eight times and it’s kind of just what they do, steamroll everyone in their path.

‘Popp is in form, she’s a real handful, although I hope with Millie Bright at the back England will be able to handle that sort of threat better than France did. There’s a lot of history [between the nations] in the men’s and women’s game, everyone’s going to be gripped.’