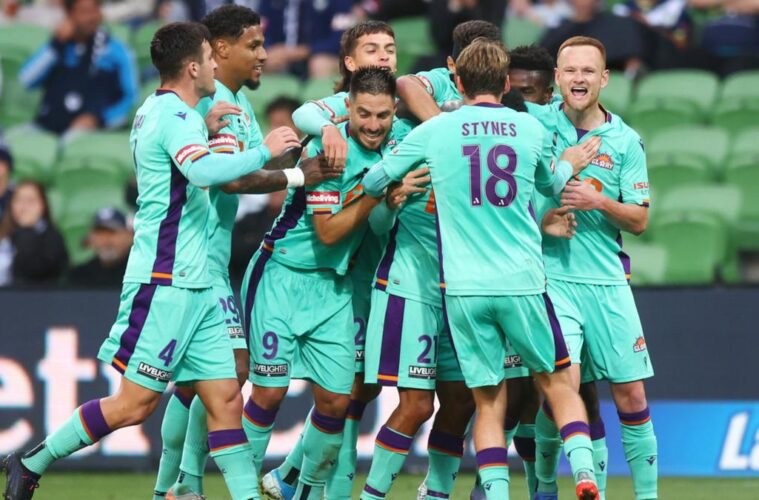 Lights, camera, action… crowd? With all eyes on new broadcasters Channel 10 and Paramount+ over the opening month of the A-League Men’s competition, perhaps people have forgotten to switch the TV/tablet/streaming service off once in a while and head to a game.

Post Covid-lethargy? QR Code Fatigue? Both possible contributing factors, but since the Round 1 Sydney Derby between the Sky Blues and Wanderers drew a touch over 23,000 just three others have drawn upwards of 10,000, with Melbourne Victory responsible for two of them.

It’s no disaster; while sometimes portrayed as a pauper of the summer scene the A-League Men’s competition draws far more attendees than the NBL, while the once mighty Big Bash saturated itself in its own fluorescent flavour so to such a rich extent that the once hungry masses can eat no more. How can football edge it’s nose ahead again? The Age’s Michael Lynch wants to get radical.

‘I remember when I first came to Australia, the Test matches wouldn’t be televised by Channel 9 in the city of origin until the last session after tea. I sometimes wonder, ‘if Melbourne City’s games were not broadcast live in Melbourne, do you think they might get more people to the ground?’

‘I presume they’ve made some sort of economic calculation and decided that what’s really important is having them on telly and exposure for sponsors across Australia, rather than getting a crowd at the ground. I don’t like to think it’s an either or proposition, but I suspect there may be an element of it in it!’

Certainly an idea of merit, but perhaps one of a bygone era. Football fans have been indulged on a diet of every game, live and on demand across the A-League era, and a reduction now could be counterintuitive. So what has Lynch made of 10/Paramount’s nascent stages?

‘I’ll say the positive things first, I think Simon Hill and Robbie Thomson are excellent, really very good experienced broadcasters, and the addition of Teo Pellizzeri is really good for a young-up- and-comer to get into the mainstream. Teo’s done all the hard yards down here in Victoria and deserves his chance, so they’re a big plus.’

‘Less fantastic is the way they seem to be covering everything out of a studio in Sydney. I’ve been to the games in Melbourne and don’t think I’ve seen any of their broadcasters or crew…they don’t have the commentators here and I don’t think they are travelling to the games.

‘Now, is that appalling? Probably not, but it’s not desirable, is it? The Fox broadcast in the early years did pull out all the stops. I remember going to matches interstate, you’d see a whole raft of commentary and production crew who’d travelled from Sydney to Perth, or Cairns, or wherever.

‘I think that does two things. It cements the broadcasters with the clubs, the grounds, the personnel, and essentially into the fabric of the game. And it gives you that chance to notice things off the ball that those at the ground notice, and when you’re the broadcaster you’re expected to provide the eyes and ears at the ground for those that can’t get there.’