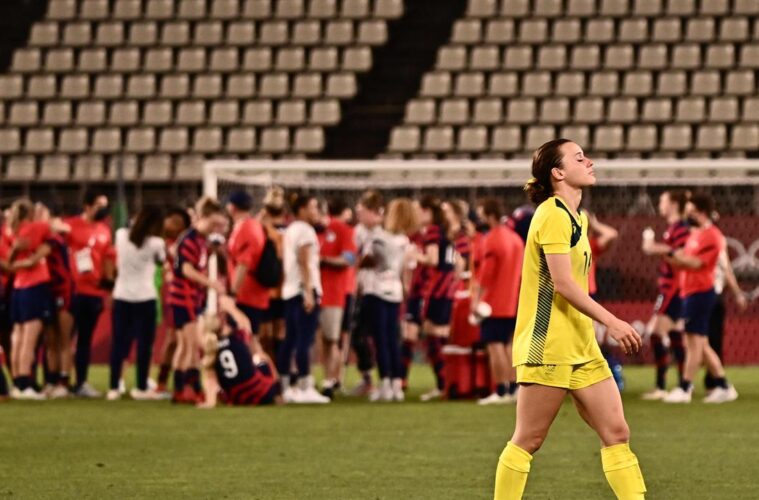 The Matildas have left the Olympics empty-handed after letting slip two opportunities to secure a medal, firstly edged out 1-0 by Sweden in the semi-final before going down ablaze to the USA in the bronze-playoff 4-3.

86-time Matilda and 2004 Olympian Melissa Barbieri still very much rides the highs and lows of the side, of which there were plenty in Tokyo, and told Box2Box she was ‘downhearted’ they have nothing to show for their exploits.

“I am a bit downhearted, it’s a tough position to be in, fourth. But I’m still proud of the girls and feeling somewhat buoyed for the future.”

Barbieri thought it important not to downplay just how gruelling the Olympic schedule and its three-day turnarounds are, but thought it also exposed the side’s reliance on a key few once again.

“Unfortunately for [manager Tony] Gustavsson he did have to use the majority of his eleven over and over again. I don’t exactly agree with it, but I don’t think he could have gotten away with it any other way. He certainly wouldn’t have got the results had he not played the players he did.”

“These Olympics would have been harder for the girls [then normal] because there is no downtime, nowhere to go. You’re literally at the training pitch, dining hall, then back in your room, isolation in between everything.”

“For the girls it was mentally challenging as well as physically challenging. The heat and humidity is just something else over there when it’s hot so it’s alarming, but I think the girls took it in their stride.”

Gustavsson’s first big decision as national boss came prior to the tournament through the non-selection of Lisa De Vanna, which would have been highly divisive whichever option he chose. Eyebrows were then raised at some of his structural decisions, namely playing Ellie Carpenter in a back three instead of out wide.

What isn’t for debate is that he looked to ensure reliance on too few won’t be a concern in 2023.

Mary Fowler and Kyah Cooney-Cross, 18 & 19 respectively, will both benefit considerably from the minutes De Vanna otherwise may have played. In any case, Barbieri felt the veteran would have been an ill fit.

“I won’t shy away from the fact Lisa can be tumultuous at times and she can actually separate the group because she doesn’t sugar-coat things, she says what she feels.”

“Gustavsson is very much a positive role model… he’s literally a life coach in football. I don’t think Lisa’s mannerisms or way she goes about things would yield a good relationship with Tony.”

That the two starlets were allowed to shine and experience a big tournament has given Barbieri confidence the future is bright beyond this current senior crop, who may only have 2023 remaining to leave a concrete legacy.

“I’ve been part impressed with Cooney-Cross’ development over the last two years. As a young teenager at Melbourne Victory she was not getting much game time based around her attitude to defending, but in my opinion she’s matured a lot.”

“When a player can do that in such a short space of time, imagine what they can do in another two years for the 2023 World Cup.”

“In terms of Mary Fowler, I feel she’s been pushed really early to go hell-for-leather in playing professionally, playing for the national team and wanting everything to happen immediately.”

“It was really great to see her fit and healthy and after having that season in France she’s physically grown and matured. You can see the power in her shots and composure under pressure, which was excellent.”

But Barbieri was less enthused about the performances of goalkeeper Teagan Micah, who usurped mainstay Lydia Williams and impressed against Great Britain, but battled against the USA.

“When in your infancy of being an international keeper you’re going to have those moments where you are making errors in routine things. But to be doing that in a major tournament can set you back.”

“I think the goals we have copped could have been dealt with better by someone who can manage the team and talk and get the girls to do the right things, and that’s an experienced keeper like Lydia.”