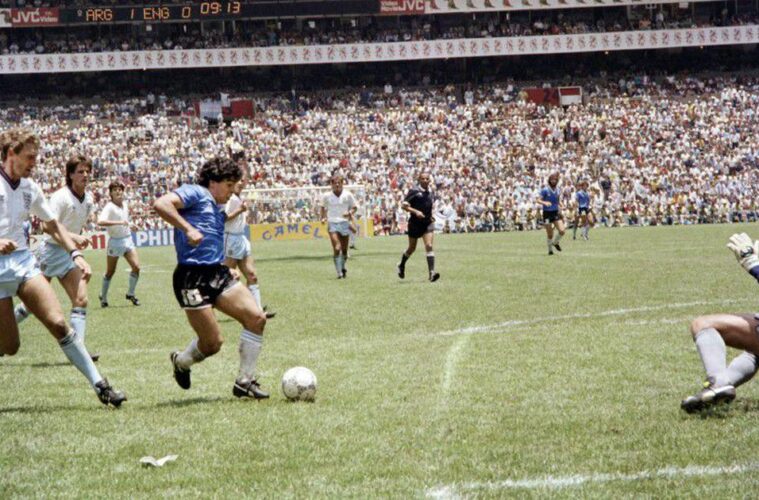 Football fans around the world were last week plunged into deep mourning by the passing of Diego Maradona aged 60, the Argentinian hero synonymous with god-like deeds on the pitch and fallibility off it.

Across a 21-year career that took in five World Cups as player and manager, one moment stands alone as the perfect encapsulation of the two sides of Maradona: his two goals in four minutes in the 1986 quarter-final against England.

Martin Tyler was commentating at Estadio Azteca in Mexico City that day, as Maradona scored one with his hand, then a second with half the English outfit in his wake en route to winning the tournament.

“It’s a day and moment I’ve had to re-live quite a lot over the past few days as you can imagine. A day of mixed emotions for everyone involved”, Tyler told Box2Box.

“My trite answer is that I thought the second goal was worth two, the first goal was worth nothing. To be able to have watched at close hand a player of that enormous talent is something that’s very special.”

Played just four years after the Faulklands War between the two nations, Tyler believes Maradona played on England’s hesitance, dragging his lesser side across the line.

“England were underestimating their own potential. I thought they were a bit cautious and Maradona cashed in on that on both goals.”

“When England got the goal back, had they got the second and it’d gone to extra time, I remain convinced England would have got through.”

“It’s one of those iconic moments that summed up the flawed genius of Diego, really. He was always surrounded by some sort of controversy, but his football was peerless.”