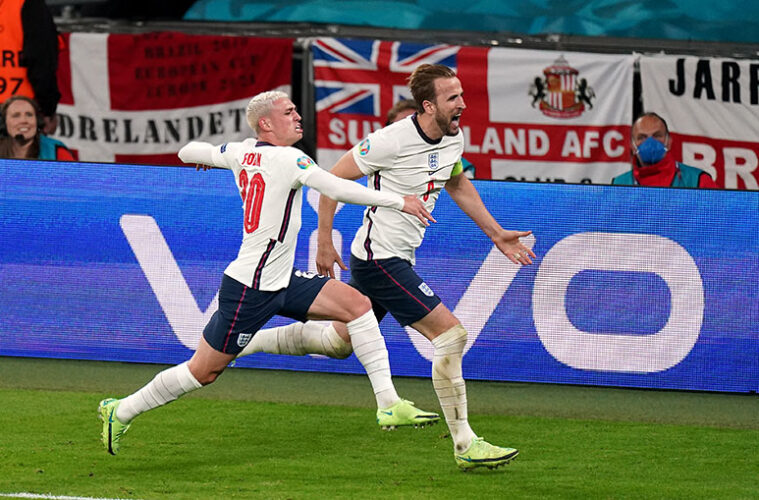 England will be hoping to put generations of despair to rest on Sunday when they face Italy in the final of the European Championships at Wembley, the scene of their only major tournament triumph in 1966.

That success remains at the heart of England’s history, but in the years preceding has been linked to their failure to add to it. Having witnessed both sides of the story, Martin Tyler, like all England fans, is hoping it can be put right.

“Just looking at it as a pure football person I thought England had a good chance of winning this tournament, so I’ve been surprised, mingling with England fans, at the pessimism, especially from the younger ones who have read about the failures in the past”, Tyler told Box2Box.

“So the mood of the nation has been lifted considerably. It’s a great credit to Gareth Southgate and the team for the way they’ve gone about it.”

It’s often remarked the Three Lions kit is the heaviest in world football, but Tyler believes it’s been the current crop’s ability to set aside historical considerations that’s seen them progress on their own journey, which now just needs a crowning glory.

“England have never made the finals of a European Championship before, so they’ve already made history. There is a sense of achievement but I know Gareth well and there’s no way hell be satisfied with this.”

An unashamed football romanticist, Tyler couldn’t resist turning to the archives in predicting how the final may play out, noting the similarities between 1966 and 2021 thus far.

“The first difficulty England had on the field was provided by Denmark with Mikkel Damsgaard’s brilliant free kick, the first goal England had conceded in the tournament. Us oldies remember England won the World Cup in 1966 and didn’t concede a goal until the semi-final then, and that finished 2-1 against Portugal all those years ago.”

“I’ve been very, very impressed by the way Italy have gone about the tournament as well. Roberto Mancini has put together an amazing team with an amazing set of statistics, so it’s not done for England yet.”

“Italy, despite being a southern European country with a tradition of thoughtful, cerebral football, they’re an up and at ‘em team now, it will be a great final.”

“I think the two best teams in the tournament have got to the final, so it’s a credit to them and the way it’s been organised. It’s been really difficult with all the different countries and all the different quarantines and regulations.”

“I’m really thrilled as a football lover to be talking to you at this stage now, down to the 51st and final game, and the best two teams are in it.”