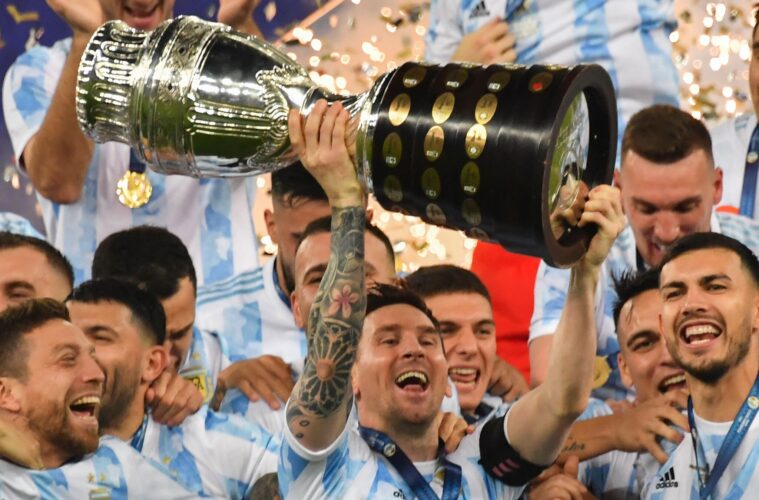 As two-time World Cup winners and producer of two of the game’s all-time finest talents, Argentina is rightfully entrenched as one of football’s great nations.

But having spent the past 28-years without a major international trophy, a drought that took in three losses in Copa America finals and the 2014 World Cup, questions had arisen as to whether their titanic stature was still relevant in the modern age.

It’s why their 1-0 defeat of Brazil in Sunday’s Copa America final, through Angel Di Maria’s first-half lobbed finish, meant so much to the nation, and their talisman Lionel Messi. They’ve now drawn level with Uruguay for the most South American titles with fifteen, and hope has been restored ahead of next year’s World Cup.

“On the one hand, this was a really important international title for a country that fancies itself as an authority in world football but hadn’t actually won anything or been acknowledged for many years”, The Guardian’s Marcela Mora y Araujo told Box2Box.

“On the other hand it was Messi’s win, his shift in standing from being the acknowledged greatest player in the world but unable to deliver for the country, to finally achieving his dream and his pending assignment.”

No discussion of Messi’s legacy from an Argentina perspective can be conducted without comparison to Diego Maradona, whose passing last year served as a reminder of the enduring national adulation towards him.

For his off-field travails and excesses Maradona’s commitment to country was never questioned, with the 1986 World Cup win and 1993 return held as exemplars of this commitment.

Messi himself has played at four World Cups across 151 appearances, but in some quarters has been harshly considered Maradona’s opposite; a cleanskin, but not entirely committed to the cause. Arajuo believes his lack of trophies fuelled these perceptions.

“It’s something that was a massive deficiency for him and his relationship with the country. For all the years Messi had been winning at club level with Barcelona, he’d not quite managed to deliver the ultimate trophy.”

“For some reason this drought had become an issue, and I think it’s led to a questioning of him and of his ‘Argentinian-ness’, somehow.”

Messi’s time with La Albiceleste has spanned nine managers, starting with Jose Nestor Pekerman and including in the likes of Jorge Sampaoli and Maradona himself.

The one who’s finally been the conduit to success has been 43-year old namesake Lionel Scaloni, an understated former defender who earned a comparatively modest six caps for Argentina between 2003-05.

“The role of Argentina manager has for a number of years been: ‘make Messi happy, get him to function. The discourse is always “we must talk to Guardiola, Pochettino…but [the team] was shambolic to the point that, why would anybody [high profile] want to go and work for them?”

“And so Scaloni’s stepped in… he’s a kind of non-controversial, low profile figure.
There was this structure he’d made, without Messi. So rather than it all revolve around him in an asphyxiating way, they managed to do what has been needed for so long, which is to find a system in which he can be [just one] element.”