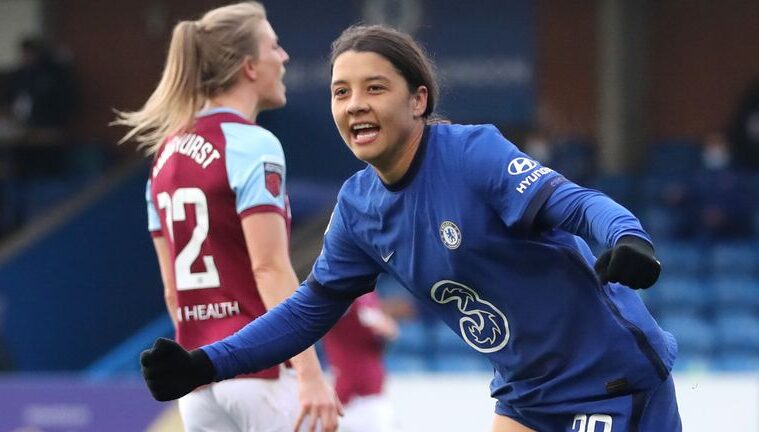 For a player often touted as one of the best in the world, Sam Kerr hasn’t quite displayed her best football consistently across her first year with Chelsea.

But as the FA Women’s Super League ticked past the halfway point last week Kerr sent a reminder of her capabilities, netting her first Blues hat-trick in a 3-2 win over West Ham.

Although she finished the game on the bench having picked up a knock, Beyond 90’s Marissa Lordanic told Box2Box the performance will have lifted any nagging doubts about her output.

“Her reputation proceeds her, but it almost became a double edged sword where people expected something from her, and had this clear idea of what she could produce and she wasn’t meeting that expectation”, Lordanic said.

“Now she’s produced the performance the world expects of her. It’s very much a relief for everyone involved.”

Having dominated the Australian, US and international scenes, the expectation was Kerr would simply replicate her feats in Chelsea blue.

Lordanic believes what’s not been discussed is the rise in standard the WSL is delivering, above even that of America’s highly respected National Women’s Soccer League.

“It’s not just the WSL she’s playing in, and there’s plenty of talent from national teams in that competition, but in Sam’s case she’s got Champions League as well, so she’ll be coming up against other strong defenders in Europe.”

“The environment she finds herself in is one that can only be good for her as a player and for all of us as Matildas fans, that she gets to test herself week in, week out in multiple comps.”

Besides league leaders Manchester United, Chelsea’s strongest competition this season is coming from up the road, the ever-successful Arsenal with their distinct Aussie flavour currently second.

Kerr’s Matildas offsider Caitlin Foord is back to her best in a stacked Gunners frontline, her five goals one shy of Kerr’s tally.

“There’s been injuries in the Arsenal squad which has meant Joe Montemurro has had to use her more than anyone thought, so really it’s all panned out well for Caitlin.”