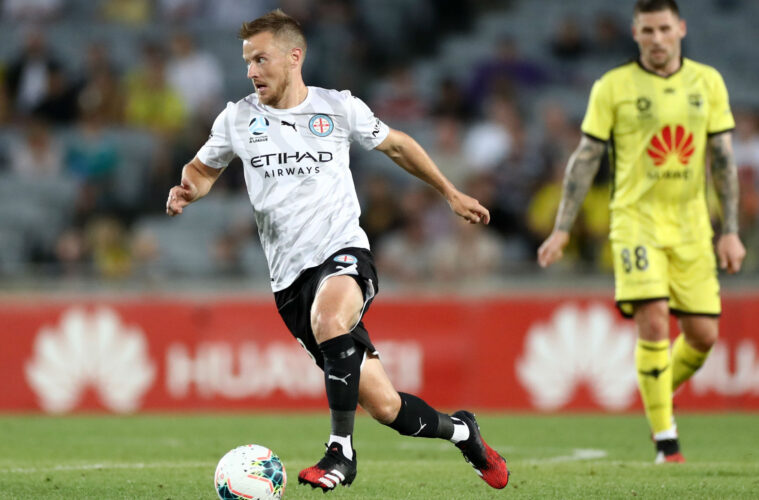 Melbourne City will be looking to extend their winning start under new boss Paddy Kisnorbo when they face Adelaide at Hindmarsh stadium tonight.

It’ll be a second away trip on the trot for City, who ground out a 1-0 win with 10-men against Brisbane at Redcliffe Stadium last Tuesday.

“We were sloppy in the first half and didn’t play well for our standards and that was disappointing, but in the second half we did ever so well”, City skipper Scott Jamieson told Box2Box.

“Obviously down to ten men, backs against the wall, we defended so well. Those wins are very important down the business end of the season, because when you don’t play well but get the result that’s what makes strong teams.”

City’s goal came from Connor Metcalfe, who displayed his talent early last season but dropped away towards the back end, his early efforts rewarded with a trip to Thailand with the Olyroos.

“Coming back he probably didn’t hit the heights he did at the start of the season. Having another full pre-season under his belt and that experience of last year, he’s got the Olympics coming up but his focus is on playing well for Melbourne City.”

“In my opinion he’s probably only second to JMac [Jamie Maclaren] in terms of finishing [at City]. He’s got to be aiming for 5-10 goals, so for him to get the first one in the first game, I’m really pleased for him.”

Another three points today will cement City’s position as contenders to go one better this season, as they finally fulfil the on-field promise they’ve teased for so long.

Off the pitch their identity remains in question. However that too may be in line for a remedy, with Jamieson throwing his support behind the recently-announced move to Casey Fields ahead of next season.

“We as a club have been in the shadows of Melbourne Victory in the sense of crowds and memberships. With this move, it’s a forward thinking move, it’s one I think the club should be commended for.”

“It doesn’t shy away from us still having fans and supporters and members in different parts of Melbourne, they’ll still be a part of it. But it gives us a chance to nail down that region.”