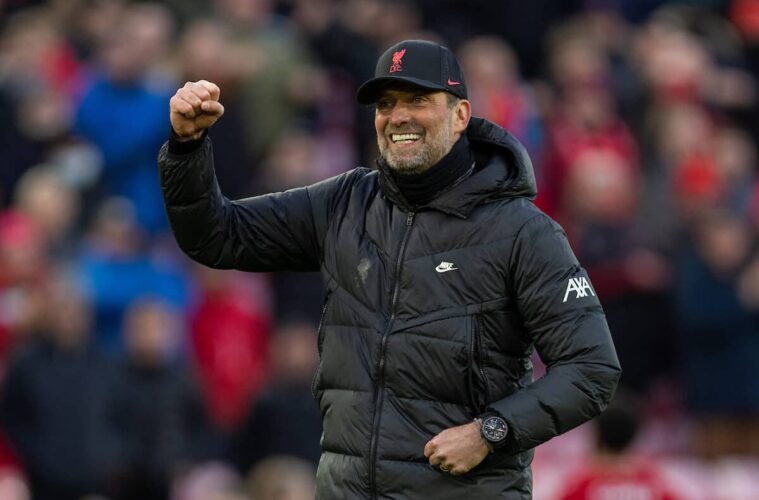 Liverpool’s 2-0 win away to Brighton overnight has kept them within three points of Manchester City in the Premier League with ten matches to play, chasing a second league title under Jürgen Klopp to supplement their drought-breaking success of 2019/20.

In seven years since his move from Borussia Dortmund Klopp has returned Liverpool to the top table of European football, winning the Champions League in 2019 and embedding a consistency of excellence not associated with the club since their first stint under Kenny Dalglish.

Aged 54, Klopp has banked years worth of goodwill at Anfield and could embark on a full-blown Klopp-ocracy if he so desired. Instead he’s consistently stated he’ll hand over the reins at the end of his current deal, intent to spend time with his family.

‘His contract runs to the summer of 2024, and the ideal scenario would be that he does stick around for a few more years beyond that’, The Athletic’s James Pearce told Box2Box.

‘But from the people I’ve spoken to at Liverpool, as it stands, they’re not expecting his stance to change. All you can do is try and ensure the foundations are really solid for the next man that comes in, whether that is Steven Gerrard, Pep Linders, or someone else.’

Like Sir Alex Ferguson at Manchester United and Arsene Wenger at Arsenal before him, Klopp’s influence at Liverpool extends far beyond the match-day squad, fulfilling his title as ‘manager’ of the club to the truest sense of the word.

But Pearce believes any separation would cause significantly less pain to Liverpool than those other two high-profile exits did at their respective clubs, with solidity and continuity having been embedded in other key posts at the Reds.

‘In key positions off the pitch, CEO Kenny Morgan was a guy that had worked at the club for a long time, similarly with Julian Ward taking over as Sporting Director this summer. If you’re looking for continuity, which is what Liverpool have gone for in other areas of the club, Linders ticks a lot of those boxes.’

39-year old Linders has been a long-time assistant at Liverpool, serving under Brendan Rogers and Klopp before taking up a senior role with NEC Nijmegen in his native Netherlands in 2018. Less than five months later he returned to Anfield, and to this point a lack of senior management does stand out on his resume.

The romantic option is of course favourite son Gerrard, whose steady success at Rangers and now Aston Villa has always been viewed through the broader prism that he will continue to ascend all the way back to his boyhood club.

‘Clearly with Gerrard there is a massive emotional connection because of what the club means to him, and what he means to everyone at the club. He showed amazing loyalty in tough times when he could easily have gone elsewhere to fuel both his medal collection and his bank balance.