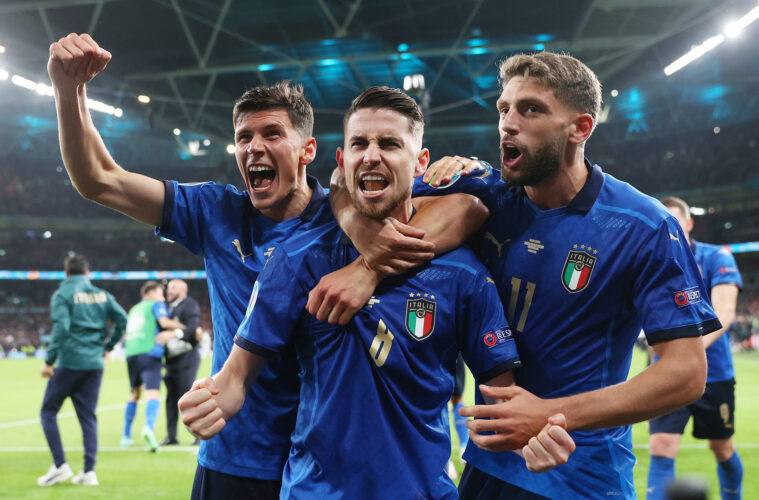 Roberto Mancini’s Italy are on the verge of one of football’s great redemption tales ahead of Monday’s European Championship final, having lost just twice their ignominious absence from the 2018 World Cup.

When Italy failed to hit the net against Sweden at the San Siro in November 2017, the Azzurri’s darkest day, the prospect of winning an international tournament must have felt a world away.

But as Mancini’s revival project began in the following years, notching 33 unbeaten games to this point, Italy as a nation endured a different pain altogether, ravaged by Covid-19.

“Obviously the entire world has suffered with Covid, but Italy had as tough a time as anybody with that. 130,000 lives lost. The narrative has certainly shifted more in that direction, in terms of eleven men playing for a country of 60million. It means so much more than football”, Adriano Del Monte told Box2Box.

“Historically when Italy have come through difficult times that’s often when eleven players perform at their absolute best, so no surprise Italy are in the final. The feeling there is they are expected to go in, win this and bring the cup home for the second time.”

The last side in their path is England, who will enjoy the comforts of home at Wembley, although Italy have played there twice themselves this tournament.

Italy’s much vaunted midfield three has been the heartbeat of their success, although was proven to be fallible in their marginal semi-final win over Spain, where they spent large periods on the back foot.

That Italy still found a way home showed they possess the resilience required to win major tournaments. But how will that Spanish performance impact the final? Have Italy had a wake-up call? Or have England been handed the blueprint to beat them?

“I think England’s midfield is very different to what Italy experienced against Spain and with that in mind I think Italy will dominate the possession. I think Mancini will just play his game, it will be Southgate’s England who will need to adapt more.”

“Spain did so well to close down possession and time on the ball, but I’m anticipating Italy will control the ball. I think they’ll have far more control over the likes of Rice and Phillips.”

Perhaps the only other area of concern for Mancini is with his centre-forward Ciro Immobile, who after group stage goals against Turkey and Switzerland has been less conspicuous since.

“I’d leave it as is… Mancini made some interesting comments the other day, he said it’s often those who are maligned or have pressure on them who stand up and deliver when it counts. I have a little feeling it could be Immobile who finds the back of the net.”