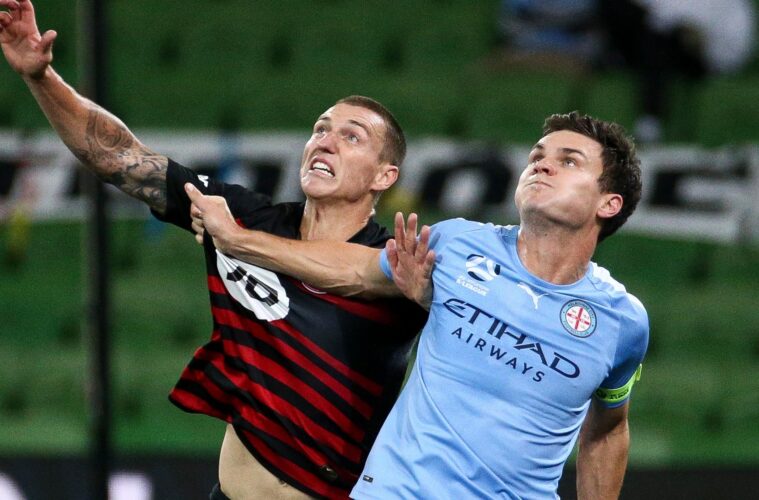 GOOD IN NATIONAL FRAME AS CITY PUSH FOR HONOURS

Curtis Good knows how fickle football can be. Once considered a generational talent in Australia, he was just 20 when Ange Postecoglou handed him his Socceroos debut against Ecuador in early 2014.

Good impressed in his hour on the park, and with Matthew Spiranovic looked to form Postecoglou’s first choice centre-back pairing. The Brazil World Cup was just three months away.

Seven years on, it remains his sole Socceroos appearance – a hip injury sustained in that match cruelled his career at Newcastle United, and he spent years of the interim grinding in rehab rooms to resurrect his career.

It’s why now, despite having put together a brilliant eighteen months at Melbourne City, he won’t be drawn on calls for his national recall for June’s World Cup qualifiers.

“I try not to think about it too much now. I know how fickle football can be unfortunately, you can be high at one stage and down a couple of weeks later”, he told Box2Box.

“I haven’t tried to think about it purely because it’s been years since I’ve been involved, but I do like to think I’ve put myself in a position where I’m on the radar.”

A Socceroos selection could prove bittersweet, for football’s mid-year fixture crunch will see national representatives drawn away from the A-League finals campaign.

For Good, who forged his career at the club during the Melbourne Heart era and has rebuilt it with City, it’s a conflict that could weigh heavier than most – and all the more reason to strive for the Premiers Plate.

“It’s a bit unfortunate but it is your country at the end of the day. If you could have the best of both worlds, I think most A-League players would go. To be involved in both would be amazing.”

Sitting on top of the ladder with a game in hand, City can take another huge step towards the Premiership with a win from tonight’s trip to Macarthur.

Having overcome a slow start to the season under Patrick Kisnorbo they’ve been rampant in recent weeks, with a collective 13-0 scoreline from two games against Melbourne Victory swelling their goal difference to +20.

“It’s pretty amazing at the moment to be honest; it’s sort of that feeling that we can beat anyone. When we go forward we’re always feeling dangerous, always feeling like we’re going to score.”

“That’s a credit to the boys, especially the boys up top who have been playing this real fast, attacking brand of football. It’s fantastic to watch, even for me at the back, it makes it really exciting to be part of it.”