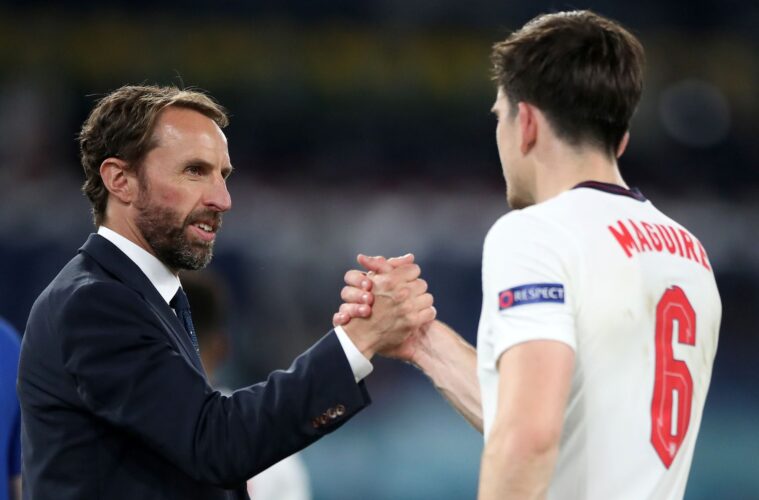 England will return to the comforts of Wembley this Thursday (AEST) for their European Championship semi-final against Denmark, having comfortably disposed of Ukraine 4-0 in Rome.

It will be the Three Lions second major tournament semi-final under manager Gareth Southgate and having not conceded a goal to this point, will be confident of going at least a step further than at the 2018 World Cup.

The Guardian’s Max Rushden told Box2Box while Southgate’s off-field ability has never been in question, this run has seen the lingering concerns over his tactical acumen finally start to erode for good.

“There is absolutely no doubt he’s done everything right off the pitch, he’s a better statesman than the current leader of the country… every single aspect of what an England manager should do, in support of his players, I think he’s done every part of the brilliantly”, he said.

“The question marks that do still exist, and less so as the tournament progresses, [are] about how good a football manager he is, and how good he is in those pivotal moments.”

Rushden believes the key in Southgate harnessing his array of attacking talents successfully – a task that’s proved troublesome for his predecessors – has been to resist calls to unleash them all at once, and retain a degree of circumspection.

“What we have seen is bravery from Southgate, and not a bravery in the sense of brave attacking football, but a bravery in playing quite cagey defensive football. What he’s looked at, is ‘how do I win a tournament?’

“You do it by being quite stilted and quite boring. I think that shows an incredible bravery, to not listen to the noise to switch everything off.”

Still, to progress in tournaments you’ll at times need to find a way to grind out a goal. Rushden pointed to England’s Round of 16 win over Germany, in which they wrestled not only with their opponents but generations of angst, as an example of Southgate’s ability to influence proceedings from the touchline.

The deployment of Jack Grealish on 69 minutes was astutely timed, the Aston Villa man involved in both goals as they broke the deadlock against tiring defenders.

“I think tactically Southgate got it right. That’s not to say it was a master class because the game could have gone either way, but I think Grealish did make a difference when he came on.”

“When he came on it moved Sterling to the other side, Grealish managed to free up Harry Kane, he had so much more impact on the game in the 20 mins Grealish was on the pitch.”