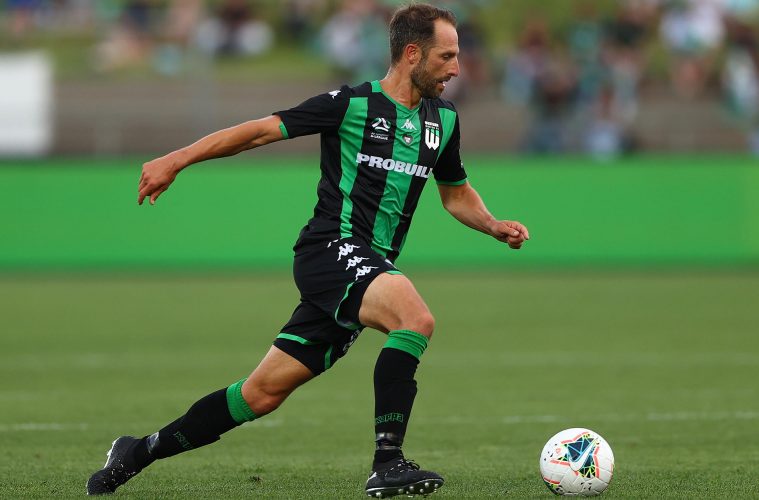 Western United’s Andrew Durante is hoping his side can re-discover their pre-Covid-19-form when they end their four-month break against Melbourne Victory this Saturday.

After an ‘up-and-down’ first season in the A-League the club is being challenged for their place in the finals by Adelaide and Newcastle, but Durante believes their best is good enough.

“Just before the Covid break we were playing some really good football, we beat Central Coast 6-2, Adelaide 5-1 away from home, so we’d really found our groove again”, he told Box2Box.

“We’re hoping we can take off where we left off… we have really big aspirations to be in the finals series so it’s going to a crucial game for us.”

Despite midfielder Panagiotis Kone walking out the door, United will be buoyed by the recent re-singings of keeper Philip Kurto and Alessandro Diamanti.

Diamanti in particular is a crucial retention, the effervescent attacker one of the League’s brightest players and personalities.

“Everything you see on social media is exactly how he is, it’s not fake. He’s always mucking around, always joking, always relaxed, he has a really good mindset on the game.”

Durante also opened up on his surprising decision to join United, having left Wellington after eleven seasons. While the lure of home was a factor, he was also keen not to remain too comfortable.

“I love Wellington, it was a really special place for me and my family. But something inside me felt I just needed another challenge before my career came to an end.”

“The fact (United) was a start-up club and I could help create values and culture was something I really wanted to test myself with. It’s something that really drove me and sparked my interest.”