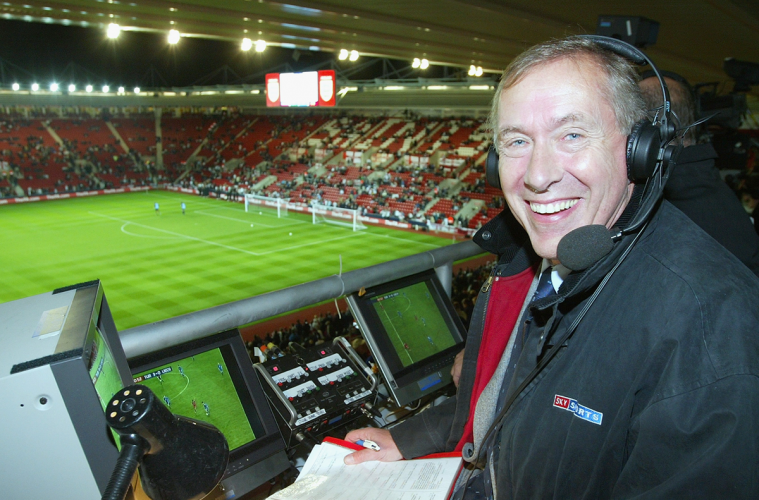 To celebrate our 250th episode the Box2Box crew spoke with commentary doyen Martin Tyler, the man whose voice has been synonymous with the show.

It could have all been so different for Martin Tyler.

Tyler has provided the soundtrack for so many of the football’s big moments, across generations and around the world; from Premier and Champions League action in England, through to World Cups for Australian audiences, where he and the game’s showpiece event are intrinsically linked.

But like many football people across the two nations, it was the summer game that was first luring Tyler from an early age.

“My grandfathers and uncles were all cricketers of Minor Counties level”, Tyler told Box2Box.

“I met (Australian Invincible cricketer) Colin McColl before I was eight. He bewildered a very little Martin Tyler with his Leg Spin that also bewildered England’s County batsmen around the time.”

Despite this it was football that would win his heart, although as a non-league striker of modest ability, his major contribution would have to wait until he hung up the boots.

On advice from legendary footballer-turned-pundit Jimmy Hill that time would come aged 27, starting with a behind-the-scenes role at London Weekend Television.

“I (initially) said ‘no, it’s a Saturday job and we play Saturdays, and I can’t give up playing, I’m 27.’ (I then) bumped into Jimmy Hill when I was delivering his copy”, he recalled.

“I remember him saying, ‘how good a player are you then, if you want to give up a career in television to continue playing non-league football!?’

“I was fed up very quickly being in the studios when I’d been out playing. The only way I could get out again was to think about doing broadcasting. Within about 16/17 months I was doing my first commentary.”

That commentary would see Tyler in Australia fifteen years later, covering the 1988 Bicentennial Gold Cup for the ABC.

It was at Parramatta Stadium in early-July, as the Socceroos trounced Saudi Arabia 3-0, that Tyler met SBS Producer Dominic Galanti. Within two years Tyler would leverage the contact, while out of work ahead of the Italia ’90 World Cup.

“I’ve been so very grateful, it’s been brilliant, and the feeling is still there. I did the last World Cup from Russia (for SBS), I hope I’ve still got the stamina in me to do the next one.”