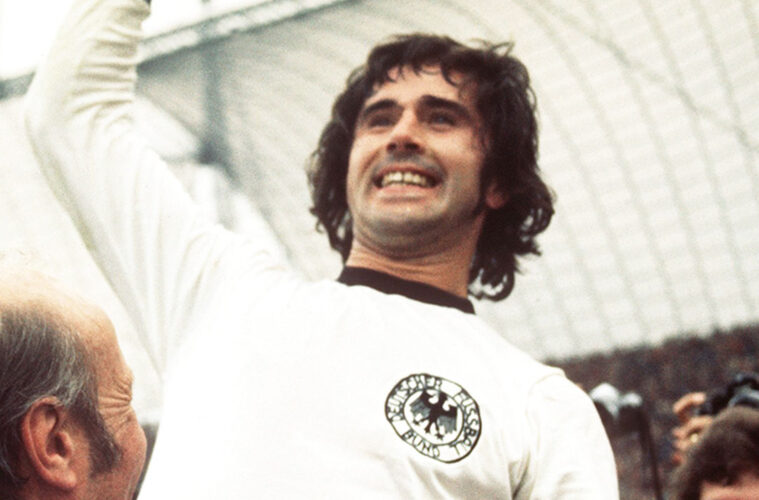 Chris Williams reflects on life and legacy of Gerd Müller

Müller is most remembered internationally for his phenomenal World Cup goal scoring record, having netted fourteen times from thirteen games across the 1970 and ’74 editions, the last of these the winner in the final on home soil for West Germany.

Domestically the fifteen years he spent with Bayern Munich between 1964-1979 saw them win the Bundesliga four times, DFB-Pokal four times and European Cup thrice, all powered by the extraordinary goal scoring ability of their unassuming striker.

“He’s been ill for some time, so his passing was expected but that still doesn’t make it any easier for everyone in Germany, and especially everyone at Bayern.”

If you’d not seen a single clip of Müller in flight, his numbers alone would do more than enough to convince you of his legend: his 365 Bundesliga goals remain a record, 40 of these from the 1973/74 season; 66 goals from 74 European matches; 85 goals in the 1972 calendar year.

But as Williams explained the gravity and style of his goals saw those figures take on even greater meaning. Outside of World Cups he scored twice in the 1972 Euro final, courtesy of his ‘fox in the box’ instincts that helped him hit the net by hook or crook. He had an honest, workmanlike genius.

“He said himself in order to be an effective striker you have to be blind in the box. You have to know where the goal is, doesn’t matter if you can’t see it. He didn’t score many goals from outside the area, his back was to goal for a lot of them.”

“He would score with anything: chest, head, knee, shin, studs. You look at goal scorers these days, Kane, Lewandowski, Haarland, they always have the perfect finish. Müller could score from anywhere in the box, but he could also score a scruffy goal as well.”

As with many of his era Müller’s dismount from the highs of the game brought a stumble, with a battle with alcoholism to follow his three-year stint in the USA with the Fort Lauderdale Strikers.

“Back in the 60’s and 70’s footballers would stop playing a lot earlier and didn’t really have that much to fall back on. He went over the US and played in the NASL, but that period of the game is littered with athletes who football turned it’s back on.”

“He did sort himself out, got into a coaching role with Bayern 2 (reserves). He’ll be remembered for everything he did on the pitch and the way he did it, he was a very good player, a humble player, had a little bit of fight in him but was always quite fair.”